(Natural News) Do you want a warped world run by warped people who want everyone begging the government for food, clean water and medicine? The “Green New Deal” is really a “Dark Old Scheme” folks and it’s nothing pretty. It’s not Utopia, it’s “Commie-Topia” for morons and NeverTrumpers, who are too emotionally charged by fake news to make any informed decisions anymore.

You won’t believe the bizarre posture campaign “AOC” (Alexandria Ocasio-Cortez) just launched into orbit – an orbit that seems ironically communistic. Why would the very politician who calls everyone racist fascists support a “regime change” that sports communist themes? It’s art! No, it’s communism and Nazi-ism disguised as every American getting everything for free forever, while we rebuild every machine in nine years, including farm equipment.

That’s right folks, total economic overhaul means Big Brother – Big Government having control of everything, including tractors, cars, tractor trailers, gas prices, oil prices, diesel prices, GMO food, GMO medicine, and the list goes on. The unmarried, childless bartender from somewhere wants you to fall in love with her propaganda “art” posters and bow down to the new “Queen-to-be” (Delusions of Grandeur unite!).

The apocalyptic Dark Old Scheme to re-green the earth and all of its inhabitants is nothing more than the world’s largest Ponzi scheme, where the elites can embezzle and launder all day long while the peons fight in the streets for food and drugs, while dying of cancer and 5-G radiation overload.

Check out the “Green New Scam” posters below, along with some other Communist and Nazi posters that all share similar themes. 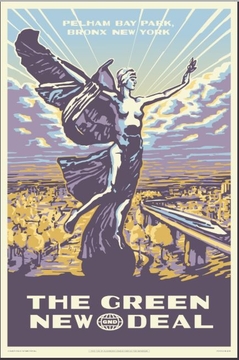 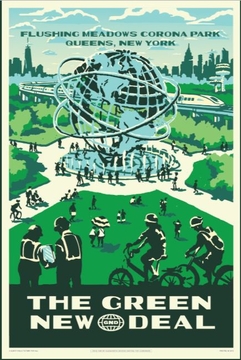 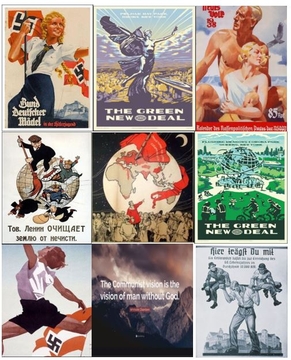 The plants that build cars and tractors burn fuel too, OAC, didn’t you know? When the factories shut down to become “green” and the tractors can’t run because they run off fuel, how exactly will America eat? Most Americans are already malnourished thanks to processed food and GMOs, now add in some free (taxpayer-funded) cheese and butter blocks, like they did in the 70s, and watch them all die of dementia and strokes from the saturated fat.

Just wait until the tractors can’t plow the fields and the semi-trucks can’t deliver the corn, soy, grains, and sugar. Every city in America will look like Charlottesville, VA, where George Soros pays vulgarians and Neanderthals to cause mass riots over nothing. That’s the “Green New Deal” for ya.

Are you being lured in by demons for free toxic medicine? How many tens of millions of Americans BRAG about their healthcare plans they get through work, only to find themselves getting 100 percent coverage for unnecessary surgery, false-positive mammograms, antibiotics prescribed for viral infections, mass heavy metal toxin overload from vaccines, and then go in for cancer treatment that literally causes new cancers to develop.

When fake medicine is free, the lines will be around the city. Get ready folks, if that’s what you’re voting for. And no cutesy “prolific” art posters will change a single thing. Once the majority of the population “dumbs-down” below that threshold of low-IQ/no common sense level (and it’s at 50 percent of all voters already), a Civil War will break out. The serendipitous irony is Conservatives own the most guns, by far.

Make no mistake, the globalists and the world’s richest white dudes are “all in” behind the mad socialist movement for America. It’s all about population control, mind control and manipulation. The elites become even filthier rich from Big Government, the middle class gets wiped out by taxes, seized businesses, seized land, and complete online censorship of voice and business, especially conservatives and independents.

You see, along with Nazi propaganda of the perfect family and that white, blond-haired, strong man, came policies of sterilization, medical experimentation, euthanasia and organ harvesting, just like Planned Parenthood today. That’s why the Left went crazy cheering for the “Day-of-Birth” abortion bill in New York. This is what is desired by “The State.” It’s for the “Greater Good,” like Hitler and “Hitlery” Hillary both said with all their logic.

In America, we promote vaccines right beside “patriotism,” so you commi-sheeple-people better go “earn your stripe!” Get some stupid in you (mercury and aluminum). Forced vaccination is on the way folks, just ask any parent living in lib-nuts-loaded California or New York.

Tune in to HealthFreedom.news and find out how socialized medicine could be the downfall of the United States of America.

Previous :Millions of American Jews have no idea that most vaccines are NOT Kosher
Next : Top 7 most absurd lies told by the ALLOPATHETIC medical industrial complex
Receive Our Free Email Newsletter