(Natural News) (Satire) Ben & Jerry’s is rolling out a new ice cream flavor that tastes like communism. It’s called, “Bernie’s Back!” and has hints of used sandals merged with the pungent scent of disheveled poverty.

The new ice cream — which isn’t a joke, by the way… it’s really a new flavor offered by Ben & Jerry’s — is free for everyone, but you have to stand in line for three days to get it. The goal is to get people into the practice of living under communism where everything is said to be free, but nothing is actually available.

Alternatively, a few lucky consumers will be allowed to go “full Venezuela” and dumpster dive for pints of the new ice cream in selected rat-infested cities like Baltimore, where “I scream” takes on a whole new meaning when facing giant, toe-biting rodents. (Not a good place to wear sandals, which is why Baltimore communists are missing so many toes.)

Every tub of “Bernie’s Back!” ice cream raises a ten-cent donation to fund the jet fuel needed to power the private jet flights of Bernie Sanders as he warns America about the climate change “crisis.” 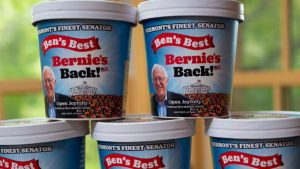 Other flavors offered by Ben & Jerry’s to help celebrate communism include:

All flavors will feature probiotics harvested from the actual sandals of Bernie Sanders.

Notably, this incredible variety of flavors and ingredients is only available for the Ben & Jerry’s production factories because of the efficiencies of free market economics. If Bernie Sanders’ ideas were actually implemented across America, there would be no ice cream for anyone. That’s why communists who actually want to succeed as entrepreneurs operate in free market nations like America, even as they are trying to destroy the very system that allowed them to generate market success in the first place.

Ben & Jerry must be ROFL, thinking how stupid Americans are to support communist leaders by purchasing ice cream delivered to them at affordable prices thanks to free market economics that communism would annihilate.

So if you want to live in a country where ice cream is affordable for everyone, don’t buy Ben & Jerry’s ice cream dream of putting Bernie Sandals in the White House.

Previous :Raw human sewage all over the beaches of California is the perfect metaphor for the failure of liberalism
Next : MULTIPLE shooters: Mass shooting at Wal-Mart in border city of El Paso, Texas, likely to be gang-related, according to early indicators
Receive Our Free Email Newsletter