(Natural News) The video platform Vimeo has banned Project Veritas and Natural News on the same day, taking part in the criminal collusion among tech giants who are systematically silencing independent journalism that keeps exposing the criminality of the tech giants themselves.

Two days ago, Project Veritas released a bombshell video showing a Google executive named Gen Jennai who admitted on camera that Google is engaged in a massive criminal scheme to alter election outcomes and silence conservative speech. Google’s video platform YouTube, to the surprise of no one, banned that video in a desperate effort to silence the explosive revelations. (Yes, Google censored a video that exposed Google’s censorship, thus proving the video’s merits yet again.)

Despite being banned by YouTube, the video remained available on Vimeo, Bitchute and Brighteon.com, where it continued to gain huge viewership.

Yesterday, in an act of obvious criminal collusion with Google, Vimeo disabled the Project Veritas account, shutting off all its videos and taking down the particular video that revealed Google’s “massive criminal enterprise” which is now openly admitted to by one of its own executives.

You can watch the full video here, via Brighteon.com, the free speech alternative to YouTube:

Vimeo bans Natural News on the same day, proving Vimeo is engaged in a criminal conspiracy to commit fraud and racketeering

Also yesterday, Vimeo banned Natural News for no reason whatsoever, other than to continue silencing independent journalists who are exposing the massive criminal fraud and racketeering of the tech giants.

It is now abundantly obvious that these tech giants are conspiring and colluding to carry out acts of extreme criminality and fraud against the world.

DO THINK BIG TECH IS WORKING TOGETHER?

Here’s what Natural News admins now see when logging in to Vimeo: 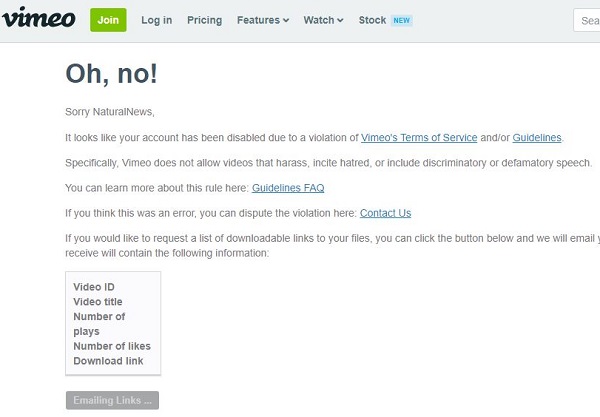 And here’s a report of Project Veritas being banned by Vimeo on the same day:

“This action shows that Big Tech corporations are enforcing an agenda of social control, where dissent is to be stomped out by any means necessary,” reports Big League Politics. “The Big Tech censorship apparatus seems to be in panic mode, as Project Veritas is urging more whistle-blowers to come forward. The flood gates may be opened on these monolithic corporations who have apparently been lying to the public about what they are plotting behind the scenes.”

What has become clear to us at Natural News is that Vimeo, Google, Apple, Facebook, Twitter, YouTube, Pinterest, MailChimp and a long list of other tech companies are engaged in coordinated criminal racketeering and fraud to silence all independent voices and shore up their monopolies.

Humanity will never be free as long as these tech tyrants are allowed to run roughshod over basic human rights and civil liberties. It’s time for the CEOs of these tech giants to be arrested and criminal prosecuted for their coordinated, criminal collusion and fraud.

Previous :Rare public appearance: Mike Adams to be keynote speaker at upcoming GenSix “True Legends” conference in Branson, Missouri, with a final warning for humanity
Next : Every employee of Google is complicit in carrying out crimes against humanity (and coordinated online “book burning” to annihilate human knowledge)
Receive Our Free Email Newsletter