(Natural News) As part of the accelerating techno-dictatorship sweeping across the online world, Apple News has banned Natural News for expressing views which Apple claims are “rejected by the scientific community.”

This ban was received shortly after Natural News published a rebuttal to the junk science climate change narrative which falsely claims that carbon dioxide is a poison that will destroy the planet. (Only someone who is scientifically illiterate or completely brainwashed could believe such a falsehood.)

Natural News dares to state the simple scientific fact — now confirmed by NASA — that carbon dioxide boosts the growth of green plants all across the Earth. This is not allowed by the techno-fascists of the Left who run Apple and insist that CO2 is somehow a poison that’s responsible for “climate change.”

Here’s the world map showing the increase in reforestation and greening, as cited by NASA and published the journal Nature: Climate Change:

Note that this image shows an increase in “greening” across every continent, which NASA confirms is due to rising carbon dioxide, a fertilizer for plants.

Even though NASA has also admitted that CO2 is greening the Earth, Apple says that Natural News stories are diverging from the “scientific community,” somehow justifying Apple’s censorship of all news from Natural News, including the hundreds of articles each month that cite scientific journals.

Natural News is the internet’s most prolific publisher of science-based news covering phytonutrients, herbal medicine, nutritional therapies, holistic health therapies and the health dangers associated with vaccines, pharmaceuticals and toxic chemotherapy treatments. Apple — which of course panders to Big Pharma, Monsanto, Bayer and the vaccine industry — has now decided that any news stories which diverge from the “official narrative” must be silenced.

This is a dangerous precedent that will stifle the very process of scientific discovery which depends on the process of considering dissenting views. With no dissenting views allowed, science can never move forward. This is Apple’s new demand: that humanity stay stuck forever in whatever myths, deceptions and misconceptions “science” believed in 2019 (and there are many).

Regardless of whether an individual agrees or disagrees with Natural News content, Apple has now decided that no one is even allowed to read or view that content. In essence, Apple is now functioning as the Ministry of Truth, deciding which science-based news stories fit the accepted “consensus” narrative versus those that diverge from establishment views. In essence, Apple has declared it will enforce a scientific dictatorship which disallows all news stories, videos or views which challenge the scientific establishment.

Here’s the email that Apple News sent to Natural News: 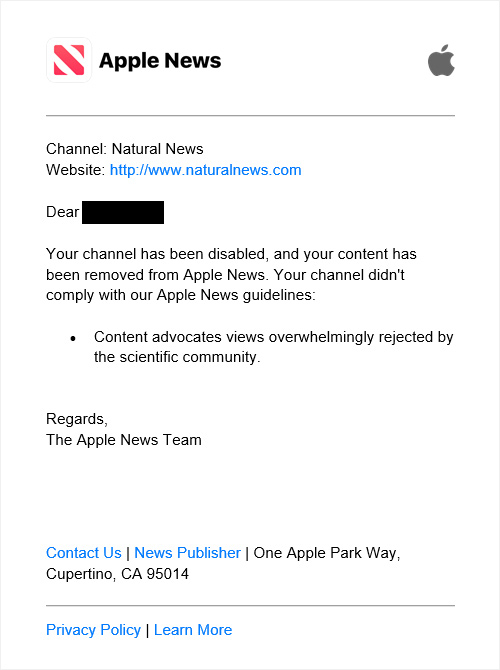 Any intelligent, informed student of the history of science might ask the obvious question: How can science be “self-correcting” if no opposing views are allowed to be seen? The history of science is full of examples of scientists being wrong about not just small things, but really big things, too.

For example, it was once the “scientific consensus” that volcanoes were caused by angry gods. Or that the Earth was flat. It wasn’t long ago that scientists claimed thalidomide was safe for pregnant women.

Even now, the “consensus” science view that claims carbon dioxide is a “pollutant” that’s destroying the planet stands in complete contradiction of the laws of plant physiology (botany) and photosynthesis. At the same time, the bizarre new left-wing “science” that claims women and men are biologically identical and that children are born “genderless,” then “assigned” a gender at birth by the doctor is of course completely insane and contradicts biological reality. 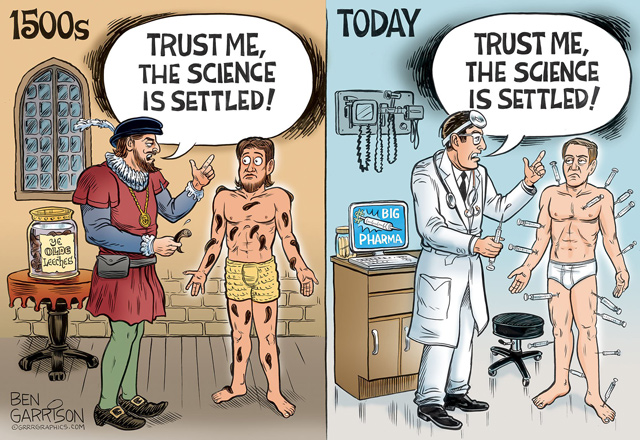 If Apple were in charge of the world in the 16th century, no one would have ever been allowed to claim the Earth wasn’t the center of the universe, or that space was (nearly) a vacuum. The progress of all human knowledge would have been put on hold, “frozen” in the Era of Ignorance, enforced by Apple.

Of course, we are still living in a new era of ignorance, and Apple has declared that no new knowledge will be allowed to be published, shared or viewed by anyone. Yet Apple gladly publishes news from sources that claim ludicrous, impossible things like claiming that men can get pregnant and give birth — that’s the new “transgender” science quackery being routinely pushed by the left-wing cult that has overtaken modern society.

Think about it: Apple insists that “transgenderism” is real, but biology, atmospheric chemistry and botany are all declare “fake” by Apple’s left-wing censors.

We have truly entered the realm of insanity, where lies are pushed as truth, and truth is labeled treason.

If you are still getting news fed to you by Apple, Facebook, Google, Twitter or any other source that’s run by left-wing lunatics, you are being brainwashed and indoctrinated by a dangerous cult that stands in completely opposition to reality and reason.

Stop reading Apple News and get off iPhones. Here are some far better news sources to check out instead:

Full resolution image at this link.

Previous :Ammo stockpiling: Four more reasons buying more ammo is one of the smartest things you’ll ever do before SHTF
Next : Progressive men literally start cutting off their own balls as gender insanity reaches new level of dangerous mental illness (op-ed)
Receive Our Free Email Newsletter