(Natural News) Just recently, the New York Times tried to slide some Jew-hating, Trump-hating, anti-Semitic and despicable “humor” under the radar of most of Americans, but they got caught. They even published it in their international edition. Then came some almost forced retractions. Still, it’s too late, and they know it. The cartoon is out there.

Plus the NYT says, in their retraction, that Netanyahu is leading Trump, but it’s really Trump walking what the Nazi’s called “subhuman” around on a leash. That’s a misleading apology meant to curb one’s thinking away from the fact that the NYT meant to degrade Jews and Trump all in one fell swoop, and think they got away with it.

By means of mass media, NYT did get away with it, because even after retraction and deletion from their website, it’s still spread all over the internet, including of course, social media. NYT wants to remind all Conservatives and Jewish people in America who plans on turning this country into a communist/socialist police state, where the government takes your guns to “protect you,” they force-vaccinate you to “keep you healthy” and they “re-educate” you to teach you subservience and how you’re really just “subhuman.” The NYT speaks for the Clintons, Obama, Soros, and the rest of the treasonous “DCD” – the DeathCultDemocrats.

When will every Jewish person in New York actually wake up and smell the death cult upon them, and STOP supporting Democrats and STOP giving the New York Times their money? The Left now represents the New World Nazis, who want all but the same end goals, they’re just going about the “change over” slower. Can you say Planned Parenthood and Measles Vaccine in the same sentence without going into a mini-convulsion?

Did you know that the Nazi’s used IQ tests to help determine who to execute?

Once you figure out that the thinkers at the top of the Democratic Party want everyone else dying and broke, you realize it wasn’t much different in Nazi Germany. Hitler and his forces wanted to eliminate certain “costly” humans and even what they considered “subhumans,” including political dissidents (especially the smart ones), the elderly, and all of those with mental health disorders, including any form of autism. Facebook anyone?

The Nazi’s also led Jews around their “palaces” on leashes like animals in their elitist abuse quarters. There was even an independent film made about that. Heck, Hitler had scientists lobotomizing Jewish children just because he was fascinated by twins.

Today, Big Pharma experiments on our children with drugs they claim help with autism, depression, anxiety, ADD, ADHD, and the list goes on. In America right now, the Left throws a victory party when they pass a law to execute healthy babies on their day of birth if the mother simply says she doesn’t want it. Today, in America, more black babies are executed by Planned Parenthood abortion style, every year, than those born alive. Think about that for a minute.

When will every person of ethnicity in this country wake up and realize the “DCD” politicians want them under their control, then gone. Yes, and now social media is banning, bankrupting, and literally removing people’s accounts who buck the insane DCD narrative. It’s all a big lie like the Russia/Trump 2 year hoax. Oops.

Now the NYT is blaming Trump for their anti-Semitic cartoon. Why not? The Democrats commit treason for two years straight, get caught, and keep doing it. It’s like the bank robbers and terrorists pointing at the police and screaming “get ’em!” The New York Times editorial board blames Trump for his “failure” to stop a rise in anti-Semitism, which is all funded by George the Nazi-sympathizer Soros, Mark Huckster Zuckerberg, Jack “Satan” Dorsey, and Jeff “Bozo” Bezos. How ironic. What a bunch of insidious creeps.

The message from the NYT to America? The Prime Minister of Israel is a dog on a leash. He’s not leading, he’s being “used” by his master. And the “master” is wearing a kippah (yarmulke), as if he’s an orthodox Jew, so the Nazi Democrats want us all to think that all Jews and Trump are the new enemies of the “state” – and that “state” being the treasonous Deep State. Question is … Are you next?

You see, during the Holocaust, the Nazis always referred to the Jews as rats or cockroaches. It was all about the psychology of cruelty to treat an entire race or creed with that “less than human” mentality. That’s how the public could fall in line behind the tyranny and rationalize murdering the costly “scapegoats” that represent all the problems with the world, including the economy, the big financial picture, and even health.

This is a fact. A Natural News journalist (leaving name out here purposely) was recently banned from using Facebook at all because he/she simply commented under the cartoon the New York Times published, saying how racist the cartoon really is and the message being implied. Namely, that Nazis treated Jews like animals, and it’s obvious this is a demeaning message to all Trump Fans, all Jewish people, and especially to Benjamin Netanyahu, the most powerful man in Israel. 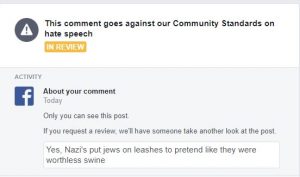 And now here are some posters that Hitler had his PR campaign published to convince the Germans and the world that there was a “master race” of people who needed and deserved to live (blond hair, blue eyes, German, smart, physically fit, etc.), but everyone else was a burden on society and needs to be exterminated. The posters point the finger at people of color, of mental handicaps, of autism, of senior age level. Do you see the connection?

The Nazi poster below shows the “ideal man and woman” as desired by the state. 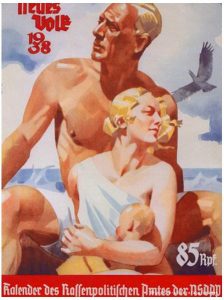 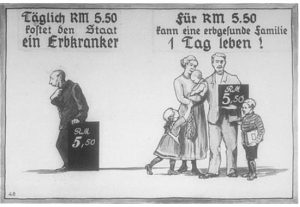 This is what modern vaccines do to children. This is why there are vaccine propaganda posters today. The same reasons as 1940. Why do you think autism rates skyrocketed when the CDC changed the vaccine schedule of about 15 – 20 vaccines twenty years ago to 60 vaccines by age 7 now? Autism is a big money maker for Big Pharma, and part of a eugenics program. Have no doubts about it. 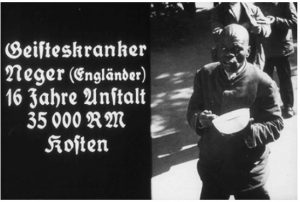 This is why Planned Parenthood executes so many black babies. This is why the Democrats love killing babies on the day of their birth, and are celebrating the New York legislation green-lighting infanticide.

Is this the Democrats’ and the New York Times’ Nazi propaganda and Nazi eugenics “poster” of how to treat all Jewish people, or just the leader of Israel?

Tune in to BigPharmaNews.com for updates on how the extreme Left and Big Pharma want to sicken you and your children, and take them away from you, especially if you’re Jewish. Truth, it’s the new “hate speech.”

Thank you for your insights Candace Owens. You expose so well how the Democrats are trying to enslave black people and Jewish people all across our country. You deserve all the respect in the world. Thanks for standing up and speaking the truth, no matter the “repercussions” the Left wields around.

Previous :You are being bombarded by FAKE News, FAKE News “Filters,” FAKE People, FAKE Food, and FAKE Medicine – What’s happening to America?
Next : Flint, Michigan residents get green light to sue the EPA for negligence over water contamination that started 5 years ago
Receive Our Free Email Newsletter