Complete insanity: Leftist smears menstrual blood all over her face to show female periods are “beautiful” and “powerful”

(Natural News) They say it takes all kinds of people to make our world as full, rich, and complete as it is, and that is certainly true.

But that doesn’t mean all people and all behaviors are necessary, helpful, or even desirable.

While Leftists decry “toxic masculinity” they simultaneously praise and celebrate “feminism,” and to the latter, the more extreme, the better. That’s why ‘young feminist’ Demetra Nyx, 26, of Los Angeles, is being celebrated on the Left after pulling a gross, radical, graphic stunt to demonstrate ‘women being empowered’: She spread her own menstrual blood all over her face (see below).

“Some feminists’ obsession with the body takes them to disgusting and disturbing extremes,” Life News observed. For sure.

The Daily Wire reported that Nyx is a “sex coach” — yes, there really is such a thing, apparently — and that she calls her  period “beautiful” and “magical.”

“Sharing pictures of blood on my face and body was just an impulse – I was creating a series to help women connect with their menstrual cycle, and I thought it would be fun,” Nyx wrote on Instagram. 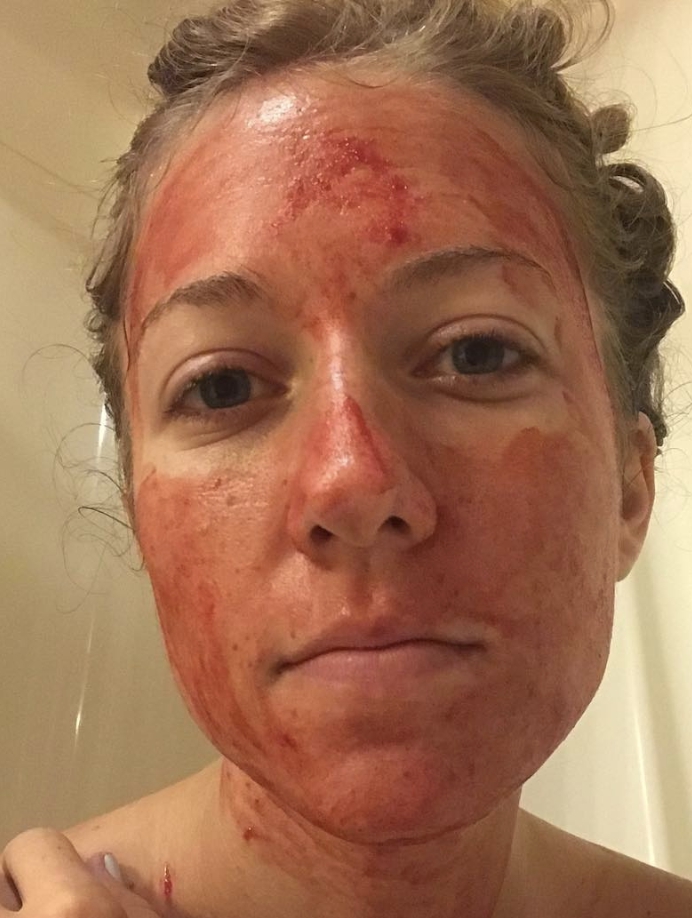 “We hold so much shame in our bodies, and most of us do not realize it until we intentionally explore it,” she continued. “Our periods are an incredibly magical time of the month that holds immense power, and our society keeps us away from that as much as possible…”

One of the photos she posted has the word “Shameless” written in blood on one of her legs. And, as shown above, others show blood smeared on her face.

“We can also do things like paint with it or pour it into the earth,” Nyx noted. “I believe it’s a beautiful thing to get comfortable with touching your own blood. I used to spend my time worrying about what other people thought of me.”

The latest attempt to debase our culture just a little more

The Scottish Sun reported that smearing the blood on her body has become something of a “ritual.”

“It is a little to liberate other women and a lot to please myself,” Nyx said. “I get so much pleasure from this ritual and I love feeling so free to share it and I love not caring what the reactions will be.”

She noted further that she’ll continue this disgusting exhibition “every month until people are no longer shocked by it.” Further, she wants to continue the ‘ritual’ “until little girls stop being taught that the natural functions of their bodies are disgusting and unclean.

“I will do it until women stop feeling like they can’t have sex on their period because it is gross,” she added.

To which we reply to all of that: “Good luck.”

As Life News added, this kind of thinking is what makes it so easy for women (and many men) to normalize abortion at any stage:

Claiming ultimate control over their body, some feminists believe there is no problem with aborting an unborn baby for any reason up to birth. They call for an end to the “stigma” and “shame” of abortion and full embrace of women’s so-called “right to choose” to do whatever she wants with her body, including killing the child she is carrying.

As for the ‘unclean’ and unsanitary nature of a woman’s monthly period, that is apparently in the eye of the beholder. Most women don’t feel the same way Nyx does. But she sees nothing wrong with it and she’s free to feel that way, even to share her experiences on her social media accounts (followers are free to unfollow, of course).

With that said, however, it’s clear that she also has a political motive for her point view: Adding one more thing to the repertoire of degenerate behaviors that are slowly but surely eroding societal normals and pillars of our culture, without ever stopping to ponder why they were norms and pillars to begin with.

Previous :A nuclear exchange between Pakistan and India would lead to a global FOOD COLLAPSE from radiation clouds, causing starvation of one billion people
Next : Federal agencies like the EPA and IRS continue to stockpile guns and ammo while Democrats push to disarm the American public
Receive Our Free Email Newsletter

Complete insanity: Leftist smears menstrual blood all over her face to show female periods are “beautiful” and “powerful”