Ocasio-Cortez’s “Green New Deal” is such a bad plan she has to LIE in order to get it passed, like Obama did with Obamacare

All of these claims were made by former President Barack Obama and Democrats when they were attempting to sell that fiasco, Obamacare, to the American people. But Americans weren’t fooled; at the time, most voters rejected a government takeover of one-sixth of the economy, so Democrats had to pull a fast one (they cheated) in order to pass Obamacare in March 2010.

As Americans would learn, none of the promises Obama made turned out to be true. Also as Americans learned, thanks to an admission by Obamacare architect Jonathan Gruber, Obama and Democrats counted on the “stupidity” of voters (and a complaint Left-wing media) to perpetuate the deception.

That was then. Now, another “Democratic Socialist” has introduced another Marxist, big government scheme that she and her backers can’t discuss truthfully over fears it will be handily rejected by most Americans.

Last week, Rep. Alexandria Ocasio-Cortez (D-N.Y.), accompanied by Sen. Ed Markey (D-Mass.), unveiled her “Green New Deal,” which she claims is primarily a plan to move the United States off of fossil fuels and into “green” renewable energy within a decade. (Related: Like Obama lied about Obamacare, Ocasio-Cortez advisor caught LYING about her ‘Green New Deal’ plan.)

According to The National Sentinel:

Ocasio-Cortez, Markey, and other Democrats envision a government-led investment effort (read taxpayer-financed, not private industry-financed) on a large scale to develop clean energy infrastructure while transforming the U.S. economy.

“The Green New Deal fully tackles the existential threat posed by climate change by presenting a comprehensive, 10-year plan that is as big as the problem it hopes to solve while creating a new era of shared prosperity,” according to a summary of the plan Democrats released Thursday.

But a funny thing has already happened on the way to try to convince Americans to give up all air travel, close most all power plants, and revert to mass transportation — rail service — that was popularized in the 1800s: AOC, as she’s known, and her surrogates have already had to lie about the real details behind the Green New Deal.

In an appearance Friday on Fox News with Tucker Carlson, AOC advisor and Cornell University law professor Robert Hockett claimed that the plan did not contain a provision to essentially provide slackers with a taxpayer-supported stipend even if they didn’t want to work.

The host  asked, “Why would we ever pay people who are ‘unwilling to work?’”

“Uh…I…we never would, right? And AOC has never said anything like that. I think you’re referring to some sort of document that…some doctored document that somebody other than us has been circulating,” Hockett said.

The Left-wing monitors of conservative media had a field day ‘correcting’ Tucker. As The Gateway Pundit noted, Andrew Lawrence, a “senior researcher” for Media Matters, tweeted:

Watch what happens when Tucker Carlson steps out of the conservative bubble and brings on an @AOC policy adviser who debunks all the conservative media lies straight to his face (spoiler: it doesn't go great for Tucker) pic.twitter.com/joDNXBBB7G

AOC retweeted Lawrence’s claim, which means she agreed with him.

But as it turns out, Lawrence was wrong and so was Hockett. TGP noted that Tucker referenced an actual document from the website where a summary of the plan was posted — by Saikat Chakrabarti, AOC’s chief of staff, according to metadata taken from the site, as noted by the graphic below: 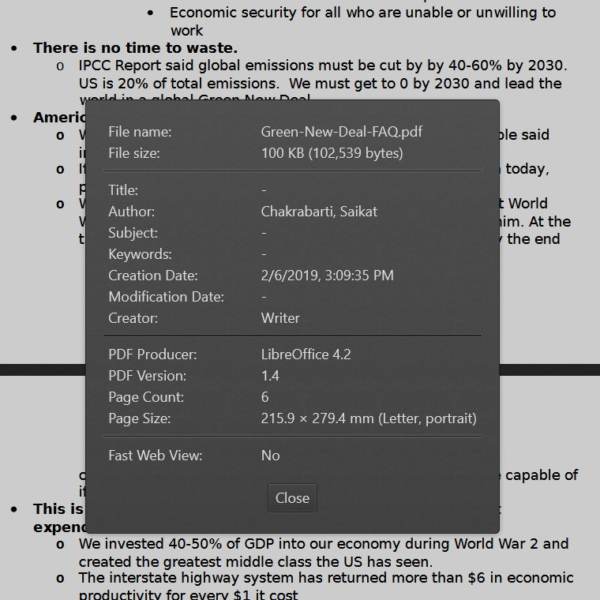 And that original document did indeed contain a provision calling for paying people for doing nothing — those “unwilling to work.”

But because she’s not mature enough yet to accept when she’s wrong, AOC proceeded to blame “Republicans” for her lie.

When your #GreenNewDeal legislation is so strong that the GOP has to resort to circulating false versions, but the real one nets 70 House cosponsors on Day 1 and all Dem presidential candidates sign on anyway https://t.co/BbHIn8cu0f

Previous :Former NY Times chief Abramson accused of ripping off LARGE portions of new book in plagiarism scheme: Is this how the paper got its “fake news” label?
Next : Dem governors pull National Guard from border, opening America to a wave of new invasions by illegals… this is WAR against America
Receive Our Free Email Newsletter

Ocasio-Cortez gets humiliated during townhall event: ‘Why can’t you be more like Tulsi Gabbard?’
AOC humiliated at town hall in viral clip: ‘Why can’t you be more like Tulsi Gabbard?’
AOC admits disturbing details behind staged arrest: Soros-funded, dark-money group coordinated stunt
Biden tests positive for COVID despite getting FOUR doses of the clot shot
Biden’s new ‘disinformation’ chief claimed that criticizing women of color like Kamala Harris and Ilhan Omar is a ‘national security threat’
AOC tests positive for covid despite being vaccinated and boosted
“AOC” mindlessly denies crime is spiking around country via “smash-and-grab” robberies, even as wealthy LA residents are forced to hire private security
The left’s war with biological reality
Lunacy: AOC calls for reduced bail for criminal defendants as man alleged to have mowed down parade participants in Waukesha was out on reduced bail
“Tax the Rich” dress designer ironically owes debt in multiple states