(Natural News) With all the perverted Jared Fogles and Harvey Weinsteins probing around in the world today, women have to be alert and ready, not afraid to protect themselves. It should never be #trendy to be a victim of sexual abuse; that’s why yoga pants with built-in gun pockets are suddenly becoming popular with young women. Women are taking their personal protection into their own hands.

Nothing is more comfortable than yoga pants, and nothing feels more secure than having built-in pockets for carrying self defense weapons. Former NRATV host Amy Robbins started a self defense clothing company to empower young women, and the brand is becoming wildly popular with Millennials.

On a daily basis, over 40 million women carry some form of self defense tool. Robbin’s new clothing line, Alexo Athletica, offers athletic pants, jackets, tanks, and sweaters with built-in pockets for carrying firearms and mace. Robbins launched the company in October 2017 from her garage in Dallas, Texas. Now, just a year later, her web store is overflowing with orders.

Alexo Athletica gained popularity with Millennials on Instagram, as young women started posting pictures and showing off the pants. Sales have gone through the roof since Thanksgiving, forcing Robbins to expand her warehouse space. Women are buying a few pairs for themselves and picking up extras for the women in their lives. Men are purchasing the pants for the women in their lives.

“I wear my Alexos at least once a week, said Brenna Spencer, 22, a University of Tennessee graduate, “I wear them the most when I workout but I also wear them when I’m running errands.”

“I carry a gun with my Alexos because I want to be able to protect myself and my loved ones,” she said in an interview with PJ Media. “I know that I can’t control sick individuals… but I can control my protection against them.” 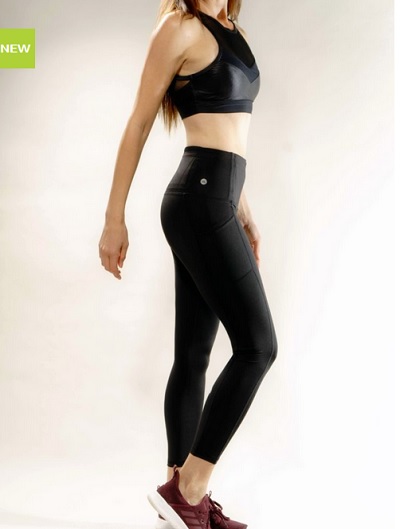 The tactical yoga pants are popular on college campuses. Even though most schools are gun-free zones, young women aren’t afraid to carry other types of weapons. “Being in college, there are very limited opportunities to carry my firearm with me” said Raegan Poole, 21, “However, my Alexo pants allow me to bring along other tools of self-defense, whether that’s my blade, a pepper blaster, or a taser.”

“There’s something so empowering about being among the young females who are equipping themselves with the necessary tools and mindset to defend themselves,” said Poole, who is now a brand ambassador.

The pants could save lives, too. Anna Paulina, a 29 year-old military veteran said the pants make it easier for her to carry. When she was 20 years old, she had a home invasion experience that caused insomnia for years. “I tried everything… but nothing quite restored my sense of security until I got my concealed carry,” Paulina told PJ Media. She now wears comfortable Alexo pants and carries a sidearm to be prepared. I NEVER want to experience that again,” she said.

For more on personal protection, check out Guns.News.

Previous :Illegal immigration costs U.S. taxpayers $155 billion per year… building a wall could pay for itself almost immediately
Next : BIOSLUDGE is a toilet-to-farm scheme that deposits toxic sewage sludge on food crops all across America
Receive Our Free Email Newsletter