NYT confirms Elizabeth Warren is 1 part Indian, 99 parts IDIOT for claiming DNA test qualifies her as a “woman of color”

(Natural News) There is a saying alternately attributed to Mark Twain and Abraham Lincoln that says something to the effect, “It is better to keep your mouth closed and let people think you are a fool than to open it and remove all doubt.”

This might have come from Proverbs 17:28  in the Bible which says, in part, “Even a fool who keeps silent is considered wise…”

No matter the origin of this phrase, it’s a very appropriate lesson for Sen. Elizabeth Warren, D-Mass., who may have destroyed any chance she had to viably win her party’s 2020 presidential nomination.

Some weeks ago, and most likely in response to endless ribbing by POTUS Donald Trump, Warren decided to take a DNA test to “prove” that her longstanding claims to possess Native American blood were true.

The fallout from releasing the results was swift and immediate. First of all, the Cherokee Nation, whose heritage she claimed, condemned her for it while an official, Cherokee Secretary of State Chuck Hoskin Jr., said in a statement that “a DNA test is useless to determine tribal citizenship.” 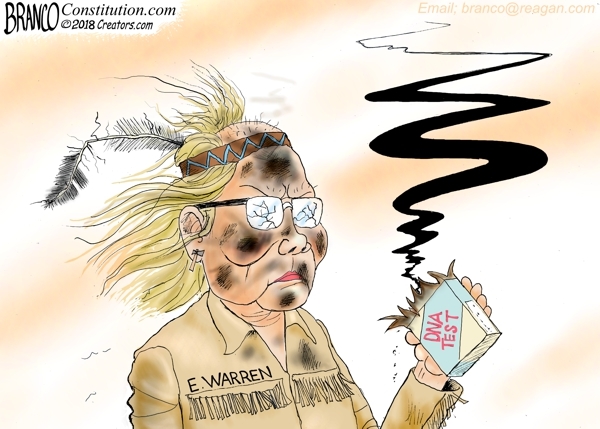 “Current DNA tests do not even distinguish whether a person’s ancestors were indigenous to North or South America,” he added. (Related: REPORT: Elizabeth Warren’s great-great-great grandfather was a member of the militia that ripped Cherokee from their homes, separating Native American families.)

POTUS Trump was also quick to ridicule “Pocohantas” Warren, tweeting, “Pocahontas (the bad version), sometimes referred to as Elizabeth Warren, is getting slammed. She took a bogus DNA test and it showed that she may be 1/1024, far less than the average American. Now Cherokee Nation denies her, ‘DNA test is useless.’ Even they don’t want her. Phony!” He also admonished her to apologize to the Cherokee Nation.

Pocahontas (the bad version), sometimes referred to as Elizabeth Warren, is getting slammed. She took a bogus DNA test and it showed that she may be 1/1024, far less than the average American. Now Cherokee Nation denies her, “DNA test is useless.” Even they don’t want her. Phony!

The criticisms were also justified, given that in her earlier days as an academic, she fudged about her ‘heritage’ to land cushy positions at Ivy League schools.

But perhaps the greatest hand-wringing came from the Left-wing media and many within the Democratic establishment, all of whom believe she tanked her 2020 presidential bid.

…[B]ut two months after Ms. Warren released the test results and drew hostile reactions from prominent tribal leaders, the lingering cloud over her likely presidential campaign has only darkened. Conservatives have continued to ridicule her. More worrisome to supporters of Ms. Warren’s presidential ambitions, she has yet to allay criticism from grass-roots progressive groups, liberal political operatives and other potential 2020 allies who complain that she put too much emphasis on the controversial field of racial science — and, in doing so, played into Mr. Trump’s hands.

Even Warren thinks she screwed up. The Times noted that privately she has admitted to advisers that the test was a slip-up given the fact that she so obviously is not a descendant — not even close — of any Native American tribe.

“The advisers say Ms. Warren will have to confront the issue again if she announces a presidential campaign, which is expected in the coming weeks, and several would like her to act soon” to address it.

Not that it will matter.

Those who are fans of Fauxcohontas have either already forgiven her or will once she throws her hat in the ring for Democrat voters to decide. And her political opponents will never forget her DNA faux pas and will remind her of it early and often, POTUS Trump included — and that’s even if she makes it out of what is expected to be a very crowded Democrat field.

Warren’s best bet would have just been to let the issue alone, but instead she had to open her mouth and prove herself the fool.

Previous :Ticket prices to hear Bill and Hillary Clinton speak plunge from hundreds of dollars each to the cost of McDonald’s meal
Next : Deep State arrests top Chinese telecom exec without telling POTUS Trump as he dines with Xi: Was it a setup?
Receive Our Free Email Newsletter