Politicos may remember that name: Barr served as AG under President George H. W. Bush, who died earlier this week.

If true, and Barr is seriously under consideration, some may view this choice as POTUS Trump giving in to the swamp. But it could be that the president wants Barr because he needs an experienced hand at the helm of a Justice Department that is in serious need of reform.

That became apparent again this week following a report from The Hill’s John Solomon, in which he dropped news bombshells regarding suspicions that James Comey’s FBI misrepresented a key document in the bureau’s pursuit of a warrant from the Foreign Intelligence Surveillance Act (FISA) court enabling agents to spy on an American citizen tied to the 2016 Trump campaign, Carter Page:

Just before Thanksgiving, House Republicans amended the list of documents they’d like President Trump to declassify in the Russia investigation. With little fanfare or explanation, the lawmakers, led by House Intelligence Committee Chairman Devin Nunes (R-Calif.), added a string of emails between the FBI and the Department of Justice (DOJ) to their wish list.

Sources tell me the targeted documents may provide the most damning evidence to date of potential abuses of the Foreign Intelligence Surveillance Act (FISA), evidence that has been kept from the majority of members of Congress for more than two years.

Solomon noted that the emails involve Comey, lawyers from the Justice Department’s national security division, and key FBI investigators involved in the “Russian collusion” probe. The date of the email string is early October 2016 before the FBI managed to secure a spy warrant from the FISA court for Page. (Related: WOW: Nunes says Comey’s FBI excluded exculpatory evidence against Carter Page to get FISA warrants.)

The emails show that the bureau was well aware that the primary ‘proof’ agents were using to justify the warrant — the so-called “Russia dossier” compiled by former British spy Christopher Steele — was bogus.

In particular, the emails show concern among intelligence community officials that the contents of the dossier were reliable.

Steele was fired by the FBI on Nov. 1, 2016, for having unauthorized contacts with the media. That firing occurred two weeks after the spy warrant was authorized.

There’s more. The FBI did not come clean for months with the American people or Congress regarding the fact that Steele was paid to find ‘dirt’ on then-GOP candidate/nominee Donald Trump by a firm that was doing political opposition research on behalf of the Hillary Clinton campaign — Fusion GPS. The bureau also did not reveal the fact that Steele had a great deal of animosity for Trump.

“If the FBI knew of his media contacts and the concerns about the reliability of his dossier before seeking the warrant, it would constitute a serious breach of FISA regulations and the trust that the FISA court places in the FBI,” Solomon writes.

The bureau, he notes, is required to certify to the FISA court prior to the approval of surveillance warrants that any evidence presented to justify spying has been verified and fact-checked for accuracy. The FBI also has an obligation to let FISA judges know if there are any flaws in evidence or information presented to the court in the FISA application suggesting the intended target may be innocent.

House Republicans are going to question Comey — who signed off on the FISA warrant — Friday. It should be noted that 10 months after special counsel Robert Muller, a Comey friend and former associate, was appointed, the fired FBI director cast aspersions on the dossier during sworn testimony before Congress, calling it “unverified” and “salacious.” Former FBI lawyer Lisa Page corroborated Comey’s characterization in recent testimony before the House. 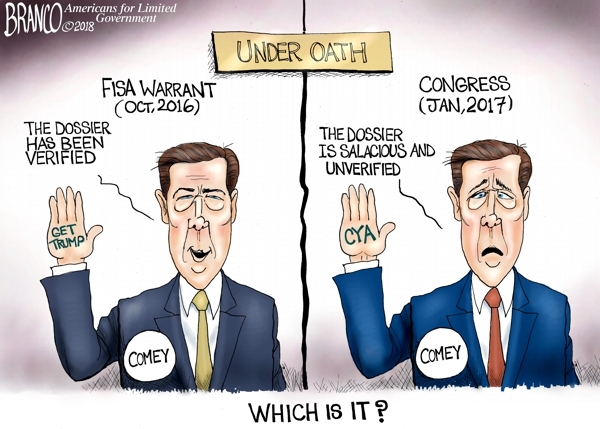 “If these documents are released, the American public will have clear and convincing evidence to see the FISA warrant that escalated the Russia probe just before Election Day was flawed and the judges [were] misled,” one knowledgeable source told Solomon.

More than anything, this lays out the case that Comey and anyone associated with the dossier should be charged by a grand jury. Why Mueller hasn’t done so already should be obvious, which makes who becomes the next AG extremely vital.

Read more about the corruption of James Comey at JamesComey.news.

Previous :How many Leftists are willing to bleed and die in order to take guns away from Americans who cherish the Constitution?
Next : Humanity is revolting against globalist plot to alter the atmosphere in the name of fighting “climate change”
Receive Our Free Email Newsletter

Climate report from 2004 predicted “millions” of deaths, sunken cities, and nuclear war by 2020
Corrupt FBI was running a treasonous espionage operation against Trump… and it’s all about to come out
Emails indicate Comey’s FBI knew “Steele dossier” was BOGUS before using it to obtain a FISA warrant to spy on Team Trump
Who’s named in the FISA memo? James Comey, Rod Rosenstein and more…
The scandal that keeps on giving: FBI claims it “LOST” months of text messages belonging to disgraced anti-Trump agent Peter Strzok
It IS bogus: FBI says it CAN’T substantiate Trump-Russia “collusion” allegations in discredited “dossier”
Yes, the Russian dossier story is a VERY big deal and here’s why
Bogus “Trump-Russia collusion” story nothing but a political hatchet job cooked up by Obama loyalist John Brennan
SCIENCE SHOCK: Almost all medical studies are “bogus” … reproducibility approaches ZERO