Americans skeptical of her claims that Kavanaugh, in a drunken stupor attempted to disrobe and rape her, want to know why she waited all these years to go public with her accusations, given that POTUS Trump’s second SCOTUS pick has been politically active in Republican circles and the federal courts for decades.

They want to know why now, after Democrats staged a dog-and-pony show to delay as much as possible Kavanaugh’s Senate Judiciary Committee hearings and were out of options to stop his eventual confirmation, Ford came forward?

They want to know why Sen. Dianne Feinstein, D-Calif., supposedly had a letter Ford sent her earlier this summer described the alleged attack and then sat on it until this week, refusing to ask Kavanaugh about it when she met with him or in public or private hearings before the Judiciary Committee.

And they want to know why Ford went to all the trouble to scrub her social media accounts and public profiles right before she ‘decided’ to go public.

Is it possible Christine Blasey Ford waited so long to come forward because she was busy scrubbing her social media pages and online profiles? #DirtyPolitics

Perhaps, as Infowars notes, the answers can be found in her political past: She was found to have donated to the Democratic National Committee as well as Marxist Bernie Sanders affiliates. And she signed a letter openly condemning POTUS Trump’s immigration and border security policies.

She even appears to have gone so far as to erase her Stanford University profile.

If word were to get out of her anti-Trump and anti-Republican politics, the American people would realize her coming forward with 35-year-old accusations just days before Kavanaugh’s confirmation is likely politically-motivated. 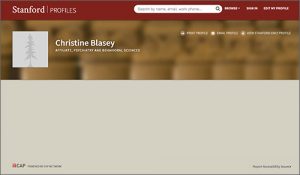 As we reported earlier, this entire ordeal – the baseless accusations, the Left’s claim that charges are the same as evidence, and their demand that all votes on Kavanaugh now be postponed indefinitely – their objective all along – smack of the Anita Hill playbook Democrats used decades ago in a fruitless attempt to stop Justice Clarence Thomas from being confirmed. Kavanaugh, like Thomas, is a constitutional originalist, not a Left-wing judicial activist hack like Justice Elena Kagan. (Related: Two former Kavanaugh girlfriends say 65 women who signed letter of support stand by it.)

Then, as now, the “seriousness of the allegations” – sexual assault – were enough to ‘prove’ that Thomas and Kavanaugh should not be confirmed and in fact, should be perpetually investigated until they either withdrew their names or had them withdrawn by the president.

But allegations do not equal proof. Allegations are not evidence. Charging someone with an illegal act has to be supported by evidence, and in Hill’s case — and Ford’s — neither has offered any.

They’ve just made the allegations.

In another sign that these allegations are illegitimate and that Ford is merely playing the foil against Kavanaugh’s confirmation, she has thus far refused to respond to repeated Senate Judiciary Committee requests to testify under oath, either in public or private, about her allegations. Kavanaugh, by comparison, has emphatically agreed to appear at a time of the committee’s choosing.

He’s also denied the allegations in the strongest possible terms.

“This is a completely false allegation,” Kavanaugh said in a statement released by the White House. “I have never done anything like what the accuser describes — to her or to anyone.”

Continuing, he said, “Because this never happened, I had no idea who was making this accusation until she identified herself [recently]. I am willing to talk to the Senate Judiciary Committee in any way the Committee deems appropriate to refute this false allegation, from 36 years ago, and defend my integrity.”

The fact that Ford is a known Democratic supporter, that she only sent a letter to a Democratic senator (instead of the Judiciary Committee and its chairman, Charles Grassley, so the matter could be addressed during Kavanaugh’s confirmation hearings), and that all of this was introduced at the last possible moment, is highly suspect.

Read more about how the White House is fighting these allegations at WhiteHouse.news.