(Natural News) Democrats and their sycophantic propaganda wing – the “mainstream” media – are doing their best to downplay the fact that the suspected murderer of University of Iowa student Mollie Tibbetts, who was discovered stabbed to death last week, is an illegal immigrant.

As The Daily Wire reports, liberal rags like Salon are grasping at every available straw – and creating as many straw ‘men’ as possible – to defer attention away from the fact that the suspect, Cristhian Bahena Rivera, was not legally permitted to be in the country and, were he not, there is about a 110 percent chance that Mollie Tibbetts would still be alive.

In the mind of Salon writer Amanda Marcotte, Tibbetts isn’t dead because Rivera is an illegal immigrant; she’s dead because he’s a man, hence the ridiculous headline, “In the wake of Mollie Tibbetts’ death, don’t blame immigrants for murder. Blame men.”

“The murder of Mollie Tibbetts fits a pattern. Not a pattern of immigrant crime, but of men killing women,” the article claims.

Men do kill women more than the other way around, sure. Men do kill more than women in general, sure.  But this lame attempt to tie Tibbetts’ murder to a broad statistic ignores the fact that had this man not been in the country in the first place…. right?

For a time, there was some confusion as to whether or not Rivera was in the country illegally. His employer, Yarrabee Farms, immediately issued a statement after he led police to Tibbetts’ body in a cornfield that Rivera had been vetted through the federal government’s E-Verify system, The Des Moines Register reported. That initial report led Rivera’s attorney to – wait for it – blame POTUS Donald Trump for tweeting about Rivera’s illegal status. (Related: Disgusting Democrats cling to open borders agenda even as American citizens like Mollie Tibbetts are butchered by illegal aliens.) 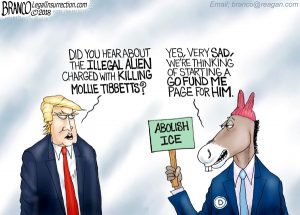 “Sad and sorry Trump has weighed in on this matter in national media which will poison the entire possible pool of jury members,” Allen Richards wrote in a court document, in reference to the president’s tweeted claim that Tibbetts’ death is the latest example of why “immigration laws are such a disgrace.”

The Left is enabling immigrant crime

Turns out the president was right (again). Federal immigration officials quickly corrected the record, disputing the employer’s claim by noting that there was no record at all of Rivera entering the country or being vetted by E-Verify, The Daily Wire reported.

Marcotte, in her Salon piece, also made sure to paint all Republicans with the broad brush of “sexism” because that’s what Leftist writers and ‘thinkers’ to – they label, stereotype, and name-call to avoid discussing the reality of illegal immigrant crime.

After labeling conservative pundits and Republican lawmakers who have been screeching for increased border security “gleeful squadrons of vultures,” Marcotte blasted POTUS Trump and White House Press Secretary Sarah Huckabee Sanders for exploiting “this murder from the podium.”

Exploiting? Making the case that it was a 100-percent preventable murder isn’t “exploitation” it’s using the president’s bully pulpit to shine a big, bright light on lawmakers and pundits who enabled it – most of them being Democrats.

Then she took aim at the real subject of her ire: Men. “There is one trait that Rivera has in common with the vast majority of people who commit crimes like this, and it’s not his skin color or the nation where he was born. It’s his gender,” she wrote.

Talk about exploitation. Sounds a lot like Marcotte is ‘exploiting’ Tibbetts’ murder to push her radical Left-wing feminist ideology, doesn’t it?

Like all the other Left-wing illegal immigration apologists – in the media, in Congress, in academia, and in the entertainment industry – Marcotte is an enabler of illegal immigrant crime. There is plenty of it to go around. In fact, everyone who breaks into our country is instantly a criminal.

To see these people try to change the subject through avoidance, virtue signaling and projection is disgusting.

Read more about the criminality of open borders at OpenBorders.news.

Previous :Swamp creatures Comey and Mueller leveraged their govt. positions to enrich themselves: Watchdog
Next : Jacksonville shooter who turned violent after losing tourney was NOT a member of “anti-Trump resistance”
Receive Our Free Email Newsletter