(Natural News) In the wake of the tragic killing of Mollie Tibbetts, the left-wing has wasted no time in trying to demonize anyone who dares to utter the words “illegal immigration.” For many, the death of another young American woman at the hands of an illegal immigrant has been hard to process — and her murder has prompted calls from the Right to buckle down on illegal immigration and tighten up the nation’s borders. But the Left is doing all they can to misconstrue concerns about illegal immigration.

A reported aunt of Tibbetts, Billie Joe Calderwood, made a statement on Facebook which read: “Please remember, Evil comes in EVERY color. Our family has been blessed to be surrounded by love, friendship and support throughout this entire ordeal by friends from all different nations and races. From the bottom of our hearts, thank you.”

Calderwood’s comments have largely been interpreted as an insinuation that concerns about illegal immigration are fueled by racism and ethnic hostility toward Latino/Hispanic people, and not simply anger at an establishment that’s failing to protect its people by continuing to tolerate illegal immigration.

It’s hard for liberals to understand that people can be concerned about illegal immigration for reasons beyond race; after all, the left-wing has routinely demonstrated that race is their most valuable card. Indeed, most Americans don’t care about the race of legal immigrants entering the country through the proper (and legal) channels.

Illegal immigration has put a hurt on the citizens of the United States: Isn’t that enough reason to be angry and concerned?  Black Lives Matter is out there, leading chaotic, riotous protests when people are killed by police officers. The group has even called for all police forces nation-wide to be dismantled, in the name of “social justice.”

Because a relative handful of officers have killed, we must do away with all law enforcement. But for some reason, we are expected to simply continue to give illegal immigration a “pass.” For some reason, Americans who are against illegal immigration are denigrated by the media — even though they too are standing up for what they believe needs to be done in order to protect themselves and their children. Where is the justice for Americans?

The lives of U.S. citizens aren’t just being put at risk, they are being put on the back-burner. We’re being told by our own government that American lives aren’t worth the effort.

And now, Facebook is censoring anyone who dares to challenge the left-wing’s race-baiting narrative.  Bill Gheen, founder of Americans for Legal Immigration PAC (ALIPAC) had his response to Calderwood’s statement censored by Facebook tyrants. 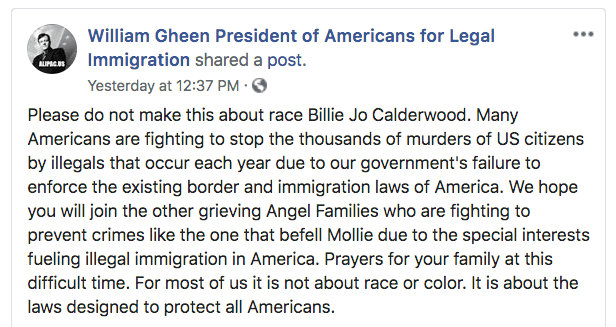 Facebook has reportedly apologized for censoring Gheen’s post, noting that his commentary did not in fact breach their community standards. As of noon-time on Aug. 24, ALIPAC reports that Gheen’s post still has not been restored — even though Facebook promised the content would be returned online.

In a statement, Gheen said, “We are so thankful The Washington Times and Breitbart News were able to get a response from Facebook and that Facebook apologized for the wrongful ban and branding of our comments as ‘Hate Speech,’ yet we are puzzled they have not restored the comment as promised.”

“Also, our hearts go out to all of the Americans out there being wrongfully censored by Facebook who do not have the means to get their story out. Facebook needs to end all censorship and suppression of our treasured free speech rights in America immediately as there is a clear pattern of bias and abuse against conservatives, Christians, and Republicans who do not share the far left values of the vast majority of Silicon Valley tech workers,” he continued.