(Natural News) If so-called climate change experts are to be believed, the human race is facing imminent and irreversible doom. Man-made global warming, they insist, is raising temperatures across our planet, melting glaciers, raising water levels, exposing oceanside populations to impending disaster, and creating scary new weather patterns. As proof of their doomsday prophecies, these “experts” provide reports from weather stations which supposedly prove that temperatures are continuing to rise at an alarming rate.

But can these reports be trusted? What if the “evidence” is based on inaccurate data and we’re all terrified for nothing?

What if some of the weather stations used to collect data are right in the path of exhaust fumes from fiery hot jet engines? Or what if these weather stations are located slap bang in the middle of overheated urban areas? Isn’t that something we should know about? (Related: Global warming data FAKED by government to fit climate change fictions.)

Several mainstream media stalwarts, including the Washington Post and BBC News, have recently reported that heat records are being broken all over the place. The Post, for example, stated:

No single record, in isolation, can be attributed to global warming. But collectively, these heat records are consistent with the kind of extremes we expect to see increase in a warming world.

As noted by Breitbart News, however, what these gloom-and-doom purveyors fail to mention is that virtually all U.S. record highs date back to the 1930s, which, as they put it, was “before man-made global warming was a thing.” (Related: Global warming debunked … NASA report verifies carbon dioxide actually cools atmosphere.)

What also has to be taken into consideration is where exactly the weather stations are located that are collecting the information related to these “new” record highs. Anthony Watts of Watts Up With That? (WUWT) explains why recent “all time high” readings recorded in California should be taken with a pinch of salt:

With those hot weather records in Los Angeles being set, it’s important to remember where measurements are taken. I’ve done an investigation and found that every “all time high” reported by the LA Times is from a station compromised by heat sources and heat sinks. In my opinion, the data from these stations is worthless.

The urban locations of many of these weather stations make data collected there worthless because of what is known as the Urban Heat Island (UHI) effect. This effect causes densely populated urban and metropolitan areas to be significantly warmer than surrounding rural areas because of human activities taking place in a confined area.

And then there’s the fact that several weather stations are literally located directly in the exhaust paths of super-hot jet engines, an example of which can be seen in this image of the airport in Rome, Italy: 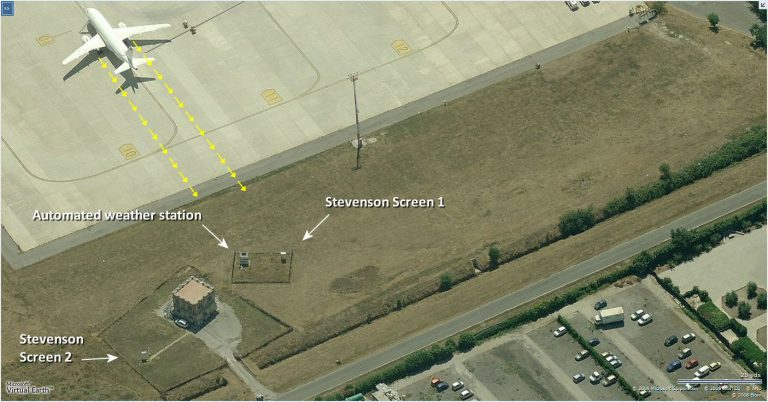 Or this image showing the weather station at the airport in Burbank, California: 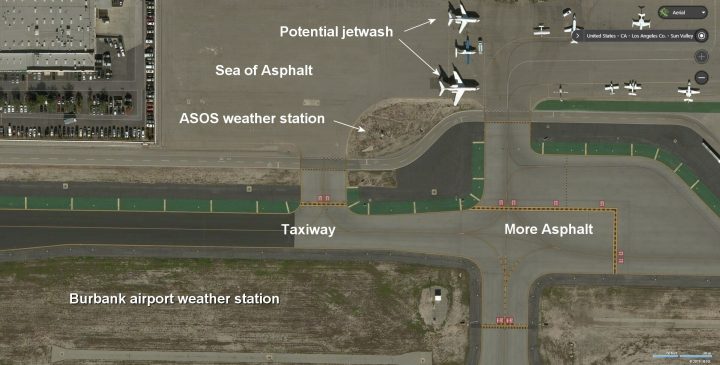 It certainly looks like all this global warming nonsense might just be a lot of hot air.

What else are they lying to you about? Discover the truth at Hoax.news.