(Natural News) Balloons can look innocent in parties, where they’re hung to liven up the place. However, a lot of these helium-inflated party favors end up on beaches, where they pollute most of the world’s coastlines. In particular, concerned campaigners from Blue Planet Society have called on McDonald’s branches in the U.K. to stop giving away balloons by collecting pictures of balloons from the fast-food giant that have washed up on beaches across the world. In addition to scrapping balloons, the organization is also seeking to stop single-use plastic (like straws) in fast-food chains in the U.K.

For Joel Hourston, the 52-year-old founder of the group, it’s an uphill battle: The groups have been met with resistance, despite their claims that balloons could be more damaging than other types of plastic waste. The images that the group has collected revealed the extent of the damage: Balloons from McDonald’s branches in the U.K. have spread to the North Sea, with others pollution distant coastlines in Belgium and Germany. To date, the group now has 300 photographs of the balloons. The images were gathered for at least a year, and almost one balloon was photographed every day. Wildlife, such as puffins and seals, could also be seen in some of the photos collected by the organization. 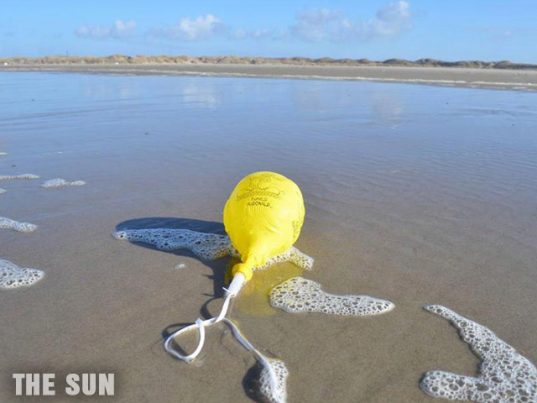 The environmental impact of balloons

Unlike other kinds of human waste, balloons can mimic marine food. If the balloons reach the atmosphere they explode, with the shredded pieces turning into fragments. The fragments are then mistaken as food, and they end up in the stomachs of dolphins, seabirds, turtles, and whales.

Hourston warned that plastics in the environment also attract pollutants.

Plastics can eventually turn into nanoplastics after they have been in the marine environment for several months or years. Nanoplastics are “ticking time bombs” that are tiny enough to be ingested via the gut walls of humans. (Related: Starting small: Environmentalists call for bans on plastic straws to reduce environmental pollution.)

He also cautioned that the three components of a balloon are an environmental hazard. Balloons are “a lethal form of [airborne] litter,” especially since they can end up polluting areas hundreds of miles away.

Hourston, who believes that “British balloons are the biggest problem,” has also sent a letter about his concerns to Steve Easterbrook, the CEO of McDonald’s in the U.K.

He’s also concerned that the fast food chain is also using the Happy Meal balloon promotion to get children hooked on fast food. It’s possible that the chain even believes that the balloons are “an integral part of their marketing.” Hourston mused that McDonald’s could address this using their global profits.

He’s certain that the fast-food chain can also come up with a more eco-friendly alternative to the balloons that would still appeal to children.

In response to Hourston’s letter, a spokesman for McDonald’s revealed that the majority of coastal restaurants no longer use helium balloons. The spokesman also said that the company would “be a good [neighbor] in all the communities we operate in and work closely with our suppliers to ensure all of our balloons are made from biodegradable materials.”

The spokesman also commented that McDonald’s had taken several measures to get customers to dispose of their trash properly. The company is also working to replace all helium balloons in coastal restaurants with stick balloons.

He concluded, “Our priority remains to provide our customers with the correct messaging on waste disposal and ensure we play our part in keeping the environment litter free.”

Instead of using store-bought decorations for your kid’s next birthday that will all accumulate in the trash, why not throw them an eco-friendly party at home? Here are some recyclable options to consider:

You can read more articles about the negative side effects of balloons on marine life at GreenLivingNews.com.

Previous :A guide to supplying your homestead with solar power
Next : Storing food without a refrigerator: 25 different kinds of root cellars
Receive Our Free Email Newsletter