(Natural News) In recent weeks a couple of conservative media outlets have begun tallying the number of violent incidents committed by Leftists against Trump supporters.

Breitbart News is keeping a running tally of those incidents. Now just a few weeks old, the number has grown from a couple hundred incidents to over 500 now (and counting).

This Democratic Socialists of America poster found in New York City says it all: 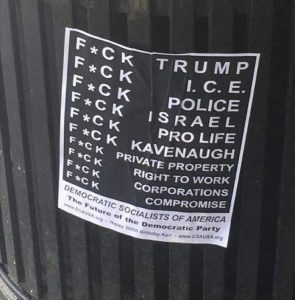 “The future of the Democratic Party.”

As one observer noted recently, “Sure, not all Democrats are Antifas, but all Antifas are undoubtedly Democrats” — or, at least, what the Democratic Party is devolving into: A mob-supporting collection of anarchists and revolutionaries who are bent on destroying the civil society because they believe they can somehow make the world a better place if they accomplish their objective.

This shift towards chaos and violence, which is unique to the Trump era, by the Democratic Left is going to be problematic going forward, especially if they take Congress in 2018 or the White House in 2020. By then, any remaining vestiges of civility will be long gone.

We know this not simply because of the violence we’ve been witnessing from the Left, but because they are telegraphing their intentions.

Breitbart’s Joel B. Pollak reported in August 2016 — nearly three months before the November election — that the Left’s plan was to utilize violence in order to bring down Trump’s candidacy. He wrote that “creating violence” at Trump rallies “is a no-lose strategy.”

If protesters can provoke Trump supporters to be violent, they embarrass Trump and cast him as a fascist. And if the protesters themselves are violent, voters will understand that a Trump victory will be met with violent mob resistance.

The goal is to make America ungovernable

The Left was so violent during the run-up to the 2016 election that the Department of Homeland Security and the FBI said their Antifa actors engaged in “domestic terrorism” at Trump campaign events. What’s more, they justified their violence as ‘necessary’ in order to quell “fascism” — having unilaterally decided, and without merit, that Trump supporters (all of them) were indeed actual fascists and white supremacists simply because they backed a candidate who dared to talk frankly about wanting to end illegal immigration. (Related: Abandoning any last pretense of law and civility, Democrats now openly support MOB RULE in America.)

Nothing has changed since those days and in fact, the violence — Breitbart’s running tally indicates — is only escalating.

The goal for the Left is to make America ungovernable, and again, they’ve telegraphed this intent.

Writing in February 2017, less than a month after POTUS Trump was inaugurated, Chris Hedges at Common Dreams, a far-Left site, wrote that it was time to literally “Make America Ungovernable,” a play off of Trump’s “Make America Great Again” campaign slogan.

Donald Trump’s regime is rapidly reconfiguring the United States into an authoritarian state. All forms of dissent will soon be criminalized. Civil liberties will no longer exist. Corporate exploitation, through the abolition of regulations and laws, will be unimpeded. Global warming will accelerate. A repugnant nationalism, amplified by government propaganda, will promote bigotry and racism. Hate crimes will explode. New wars will be launched or expanded.

Not only have none of those predictions come true but few of them could have come true. Trump was elected president, not dictator; how can he transform the country into an authoritarian regime single-handedly? That’s not just absurd it’s paranoid.

If anything, corporations have “exploited” the GOP-passed, Trump-signed tax reform legislation which has led to one record high after another on Wall Street — home to hedge fund millionaires and billionaires, true, but also to trillions of dollars in wealth held by average, ordinary Americans saving for their retirement.

The Left continues its pursuit of violence and that violence becomes more and more prevalent as Trump’s administration proceeds. At some point, it becomes overwhelming and intolerable.

Read more about the Left’s campaign of violence at Violence.news.

Previous :So, the “Deep State” is real and one CNN analyst just called on it to depose President Trump
Next : Left continues to melt down over Trump-Putin summit, but remember when Obama promised Russia he would make America MORE vulnerable?
Receive Our Free Email Newsletter

Just how long did Robert Mueller sit on the fact that the Russia collusion narrative was a HOAX? Long enough for Dems to win the House in 2018
After Google manipulated search results and the Leftist media hawked the Russian collusion hoax, we should have a midterm election REDO
Conservatives should REJECT the outcome of the 2020 election unless free speech is restored online
PROOF Google stole the 2018 election for Democrats by switching millions of votes… time to arrest Google CEO for election meddling
Massive vote fraud under way across the country as Democrats steal elections in several states
Massive election fraud in Florida reveals the deep deception of Democrats… they do this in every election, too
Red alert for the Republic: HALF of Americans just voted to destroy the country by putting socialist Democrats in charge
Votes are being switched and others not counted in several states as turnout is heavy in many districts
Is “MAGA bomber” Cesar Sayoc a patsy? He first told authorities he never sent fake bombs to Democrats
Feds arrest so-called “MAGA bomber” after finding more fake bombs as country moves closer to open warfare