(Natural News) America is on the cusp of something it has never truly experienced: mob rule.

To “feed” a mob, witch-hunts are essential. New enemies must be in constant supply to keep the mob moving. Problematically, witch-hunts never end well for the witch-hunters.

Just ask Maximilien Robespierre, one of the chief architects of the French Revolution and the infamous “Reign of Terror.”

It was 1794. Heads were rolling, literally, and “Madame la Guillotine” was more popular than ever. At first, the mob was content with the heads of King Louis XVI and Queen Marie Antoinette. The king bankrupted France by helping America win its independence with mountains of debt, all while a horrible famine ravaged the nation simultaneously. Many died of starvation. It was during the famine that the queen told her subjects, “Let them eat cake.”

With the king and queen gone, the mob’s appetite grew. They now required the heads of the aristocracy.

After the aristocracy was gone, Robespierre’s Committee on Public Safety (a massive misnomer) began sending anyone and everyone to the Guillotine — even other members of the committee itself — in order to satisfy the appetite of the mob. Georges Danton, the other influential thinker behind the French revolution, was executed by the committee.

Royals lurked under every rock and behind every tree, and unsupported suspicion was the only thing needed to deprive a person of their head.

In the ultimate twist of irony, the mob eventually required Robespierre’s head. 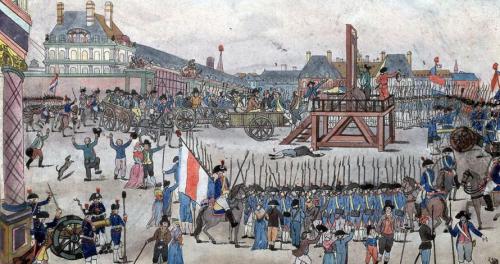 The lesson? For mobs, it’s never enough. And communities that passively surrender to mob rule in the face of civil unrest are like those who feed a crocodile, hoping to be eaten last.

Replace the revolutionary French with the “alt left,” and a disturbing pattern emerges. With the violence perpetrated by the “alt left” reaching barbaric levels, it is time to stop tolerating lies about their motives.

The“alt left” is not against racism or white nationalism. They are for anarchy — and that’s a big difference. In short, the “alt left” is a mindless mob.

And just like Robespierre’s “Reign of Terror,” the “alt left” mob may eventually accomplish its presumed objective: forcibly removing President Donald Trump from office, one way or another. But that will likely not be enough to satisfy the moving target of “alt-left” bloodlust, because the stated objective is never the real objective.

For the mob, breaking stuff and hurting people (often for pay) is the real objective. And for Antifas, the ever-evolving “cause” is a facade to justify animal behavior unfit for a free and open society.

Sure, not all Democrats are Antifas, but all Antifas are undoubtedly Democrats. Consider that top Democrats — many of them seasoned public servants — now regularly incite violent riots and actively promote the president’s assassination.

Here’s a list of 133 savage acts of documented violence (or incitement) by far-left Democrats against Trump supporters, Republicans and White House officials, including actor Peter Fonda’s call to throw Trump’s 11-year-old son Barron in a cage with pedophiles, and the latest example of outright assault against a person wearing a MAGA hat — this time a young teenager.

The violence advocated by the far left makes them complicit in the breakdown of society and the subsequent rise of mob rule. And the advocates of mob violence are not just fringe radicals or a few nut-jobs. Their ranks also boast senior Democratic Party officials and members of former President Barack Obama’s administration.

Only a week ago, California Democratic U.S. Rep. Maxine Waters openly called for the “harassment” and physical intimidation of Trump officials. Democratic Sen. Chuck Schumer condemned Waters, but it must be remembered that last year he told New York state to pull police protection from First Lady Melania Trump and Barron. Democratic 2016 vice presidential candidate Tim Kaine called for riots in streets after Trump’s victory, and was joined by former U.S. Attorney General Loretta Lynch, who also called for riots.

Former CIA Director John “Benghazi” Brennan — a man who once voted for a Communist presidential candidate and may have converted to Islam — twice called for a coup against Trump. Obama’s Undersecretary of Defense for Policy Rosa Brooks went as far as putting a plan for a military coup in writing around the same time CNN was running hypothetical “what if Trump was brutally murdered before the inauguration?” segments.

And what about entertainers? Well, they are getting a lot less entertaining, and a lot more felonious. Bill Maher joked that Ronald Reagan shooter John Hinckley, Jr. should be released, so that he can kill Trump, and only a few months ago, comedienne Kathy Griffin photographed herself holding a life-like wax model of Trump’s severed head in the style of ISIS. Last week, far-left filmmaker Michael Moore said he would lead a citizen army of “one million people” to “surround” Washington, D.C. in order to prevent lawful Supreme Court nominations by Trump. Famous musicians are also promoting violence. Madonna said she is “thinking” of bombing the White House to kill Trump, Snoop Dog released a music video depicting Trump’s murder and singer John Legend applauded Rep. Maxine Waters for advocating violence, while subsequently making similar appeals himself.

By any measure, Democrats now support mob rule. Every single time a Democrat advocates violence in place of discussion, they are supporting mob rule, not democracy, and they should be treated as potentially hostile.

When someone – anyone – starts a conversation with an assumption that the other person is evil, there can be no further conversation.Moreover, logical debate is not possible with violent mobs in ninja costumes viciously attacking those with whom they politically disagree.

History repeats itself, especially when mobs burn the pages on which it is written, and destroy monuments to the events history records. Tragically, Democrats only pay attention to history when it involves Nazis, and mostly fictional Nazis.

Robespierre speaks from the grave: mobs are never good, especially for the mobs.

Previous :Marxists and extreme radicals seek to take over the Democratic Party
Next : How protest has morphed into a dangerous insurgency movement
Receive Our Free Email Newsletter