(Natural News) It was only six months ago when Bitcoin fanatics were telling us the cryptocurrency was headed to $1 million, and that anyone who didn’t take out a mortgage to buy Bitcoin was a complete fool.

Today, of course, Bitcoin has fallen below $7,000 and continues its downward plunge. This reality has been utterly confusing to crypto enthusiasts who, like all other “bubble” followers, told themselves, “This time it’s different.”

Of course, it isn’t different at all. It’s the same tulip bulb mania repeated all over again in the age of cloud computing. When speculators believe they’re “investors,” and they think there’s real value created by verbal hype, that’s when you know things are headed off a cliff.

Even though Bitcoin is clearly an electricity-wasting Ponzi scheme built on zero real assets, some newbies are just now hearing about it, and they think they’ve discovered a perpetual motion get rich quick scheme that will allow them to acquire wealth without effort. (This is, of course, the key selling point among Bitcoin speculators, who have convinced themselves they’re actually “shrewd investors.”) In truth, they’re just being suckered into a collapsing crypto-fairy tale that never panned out because it was based on bad economics in the first place. Remember when Bitcoin enthusiasts promised that Bitcoin transactions would be extremely low cost and almost instant? Yep, and Obama said if you like your doctor, you can keep your doctor, too. Both promises turned out to be utter nonsense. 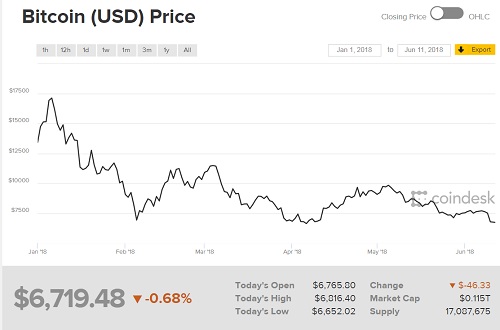 Publish your own views on Bitcoin at Brighteon.com

Then again, if you disagree with this assessment, I am giving you a platform to voice your views. In about a month, I’m launching Brighteon.com, a free speech video platform that welcomes crypto enthusiasts and skeptics alike. There, you can debate the merits of cryptocurrency, post your favorite firearms videos, and even criticize pathetic snowflakes without getting banned by the “speech police” of Google / YouTube.

In fact, the video I’m posting today about Bitcoin is primarily just a demonstration of this principle. Although I believe Bitcoin is a collapsing crypto scam, other people think it’s still just the opening chapter and that Bitcoin could skyrocket to over a million dollars a coin. Some people even think — get this — that Bitcoin is somehow better than owning physical gold. As much as I disagree with them, I agree with their right to speak, which is why I built Brighteon.com.

Check out my “7 Reasons” Bitcoin video below, and get ready to post your own at Brighteon.com. You can request a content channel right now. Account uploads are scheduled to go live before the end of this month, and public viewing of videos goes live in July (with some hand-selected videos launching July 4th).

Check out more videos at Counterthink.com.

Previous :The criminalization of science whistleblowers: A mind-blowing interview with Judy Mikovits, PhD
Next : The Clean Label Project is engaged in SCIENCE FRAUD to mislead consumers and falsely accuse protein powders of being alarmingly contaminated with heavy metals (OPINION)
Receive Our Free Email Newsletter

The crypto geniuses who vaporized a trillion dollars. Everyone trusted the two guys at Three Arrows Capital. They knew what they were doing — right?
$258 billion Dogecoin racketeering lawsuit filed against Elon Musk has expanded – massive crypto pump and dump scheme alleged
Russia legalizes cryptocurrencies for cross-border transactions
Crypto ad spending down 99.9% since February as industry meltdown continues
CRYPTO CON: Disgraced Three Arrows Capital crypto hedge fund co-founders have a long history of questionable activities
Celebrities being called out for endorsing phony cryptocurrency schemes as the bottom falls out of the industry
Senate introduces bill to classify bitcoin, ether as commodities under the regulatory authority of CFTC
The scandal-ridden crypto industry is imploding, with Celsius firing 25% of its workforce as collapse contagion spreads
Another cryptocurrency firm tanks, files for bankruptcy protection and takes life savings of thousands of people with them
California regulator to investigate crypto companies for not disclosing risks of crypto lending activities