Planet of the FAKES: Left-wing journalists use Roseanne distraction to pretend they’re not hate-filled bigots

(Natural News) Roseanne Barr’s entire career (and reputation) self-destructed today following her wildly ill-conceived tweet mocking the Obama administration’s Valerie Jarrett for physically resembling “Planet of the Apes.” Within hours, she apologized and shuttered her twitter account, explaining that it was a very distasteful joke. Without pause, the left-wing media seized upon the incident to proclaim themselves defenders of the moral high ground, instantly whitewashing all the times left-wingers in the media have viciously mocked the appearances of:

… and anyone else the Left despises.

In other words, left-wing journalists are now pushing “Planet of the FAKES,” where they all fake like they aren’t hate-filled bigots who mock conservative women (and others) for their physical appearance on a routine basis.

How many hate-filled left-wing tweets have mocked Sarah Huckabee Sanders’ appearance without any repercussions whatsoever?

Who can forget this derogatory painting released by Hollywood actor Jim Carrey, mocking the physical appearance of Sanders? 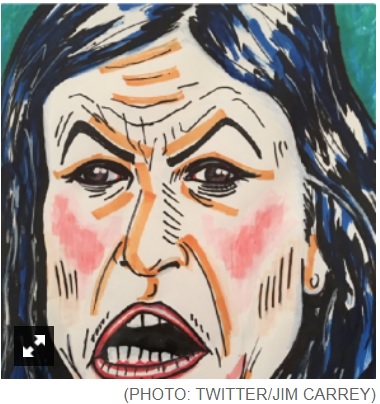 How many insults have been hurled at Sanders by Mika Brzezinski of MSNBC?

Or how about Pulitzer-Prize winning journalist David Horsey penning a piece on the Los Angeles Times, attacking Sanders with, “Sanders looks more like a slightly chunky soccer mom who organizes snacks for the kids’ game.” (Source)

And have you seen how radical left-wing feminist Chelsea Handler routinely attacks Sarah Sanders’ physical appearance? As The Federalist details, “At one point, Feimster mocks Sanders’s eye makeup and says you can apply black eye shadow with a paint roller to complete the look.” 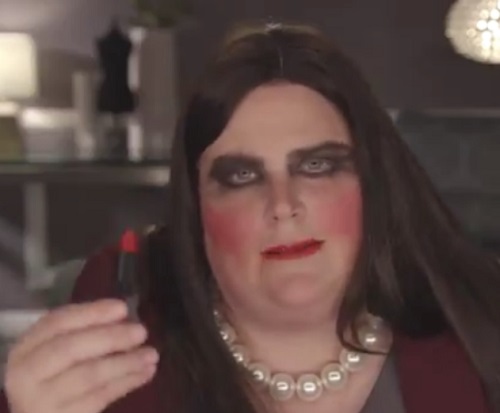 Chelsea Handler also called Sarah Sanders a “whore” while attacking her use of makeup and mascara. Via The Federalist:

Handler’s actions — angry feminist attacks Republican woman over her lipstick and eyelashes — have become a trope at this point. She’s proving that many high-profile feminists are not above acting like a teenage mean girl whenever another woman disagrees with their point of view, although they spend hours attacking as “sexism” even anodyne comments about women’s appearances. I guess some women are more equal than others to many self-declared feminists like Handler.

#RaiseTheBarr … Let’s have a new standard that applies to everyone

Roseanne Barr was wrong to issue her tweet mocking the appearance of Jarrett. But only conservatives are held responsible for such verbal faux pas. Leftists, you see, are granted a kind of “immunity” where they’re never held accountable for their own brand of hatred or bigotry. If you’re a Leftist, in other words, your bigotry never seems to count.

“Liberals can post whatever hateful slime they wish, with few if any career consequences,” reports Mark David of TownHall.com. “The moment you align yourself with conservatives, you enter a world of zero tolerance. If you are a vulgar comic spewing unprintable hate about President Trump and his family, you get a Netflix show. Roseanne Barr’s show gets canceled for one stupid tweet.”

Leftists mock President Trump’s appearance without reserve. They mock Sarah Palin with a level of cruelty that Leftists would never tolerate being aimed at one of their own. Many Leftists are actual racists who despise white people and openly call for discriminating against whites in a multitude of ways (see Intolerance.news for examples). And the “comedy” of the Left knows no bounds whatsoever when it comes to mocking the physical appearance of overweight white men (especially if they’re southerners).

None of this excuses Roseanne Barr’s wildly misguided tweet, but if we’re going to hold some people accountable for such acts of apparent bigotry, shouldn’t we have a universal standard that applies to people on both ends of the political spectrum?

That’s why I propose the Roseanne Barr standard, which I’m advocating with the hashtag #RaiseTheBarr. It says that all journalists and comedians — including the wildly inappropriate women-exploiting bigot named Jimmy Kimmel — should see their careers immediately terminated if they mock someone for their physical appearance. Obviously, if this rule were applied equally, there would be practically no left-wing journalists remaining, since they’ve almost universally gone all-in with bigotry and hatred as long as it’s directed toward conservatives.

Frankly, we shouldn’t need to resort to mocking the physical appearance of Leftists to belittle them. Simply mocking their senseless ideas is more than sufficient as a target-rich environment. And shouldn’t we judge people on their character and ideas rather than their appearance anyway?

Because, truth be told, Valerie Jarrett isn’t from Planet of the Apes, but left-wing journalists are very much operating a Planet of the FAKES “faux outrage” scheme when it comes to pretending how outraged they are over Roseanne Barr’s tweet.