(Natural News) When YouTube banned my entire channel two months ago, they were putting strikes on my account for years-old interviews I had conducted with a conspiracy analyst and author named “Jim Fetzer.”

Fetzer, who I’m now calling, “The Most Dangerous Mind in America,” is the author of a book that was literally banned by Amazon.com. Yes, the some e-commerce retailer that gladly sells books promoting Nazi fascism, deadly communism and weird sex indoctrination of children went out of its way to ban a book about Sandy Hook.

His book is entitled, “Nobody Died at Sandy Hook,” and it lays out the case for why Fetzer believes the entire Sandy Hook shooting was a staged false flag event held in an abandoned school that had no real teachers or students at the time of the shooting. (You can download the entire book at this link if you’re curious.) Notably, I disagree with many of Fetzer’s conclusions, but I agree with the right of people like Fetzer to be able to speak.

Fetzer also believes that nobody was actually shot at the Mandalay Bay event in Las Vegas. He says it was all “crowds for hire” and fake blood theatrics. I find that conclusion to be bizarre and inaccurate, but even as much as I disagree with Fetzer’s conclusions, I believe Fetzer has a right to be heard so that others can decide for themselves whether the things he says make sense. I also find it highly suspicious that companies like Amazon would go out of their way to ban Fetzer’s books when so many other obviously false books aren’t banned at all (such as books espousing the Flat Earth theory).

In an age where Pulitzer prizes are handed out to fake news media for publishing blatantly fake stories, I find it highly suspicious that Fetzer is being singled out for “extreme censorship.”

Even if you think Fetzer’s conclusions are nonsense, the banning of his books is nothing sort of authoritarian. It’s also fairly obvious that if his books were filled with total nonsense, they wouldn’t have to be banned at all because their lack of credibility would be self-evident. Yet the banning of Fetzer’s books and videos has been coordinated, aggressive and merciless.

That’s probably because his book contains a vast array of photographic evidence that many people find convincing enough to at least start questioning the official narrative we’ve all been fed on events like Sandy Hook. Perhaps Fetzer isn’t 100% correct, people might say, but he does raise some very big questions the media has been glossing over. (For example: Why is one of the supposed SWAT team police officers later interviewed as one of the parents of a Sandy Hook shooting victim? And if he’s really a SWAT guy, why was he photographed carrying his sniper rifle by the ammo magazine? No legitimate rifleman would ever carry a rifle that way…)

Here’s a popular video meme that highlights some of the huge, gaping mistakes of this “fake SWAT” actor who was widely publicized by CNN during the Sandy Hook video coverage. No legitimate SWAT member walks around slinging a rifle like this (the guy is obviously an actor): 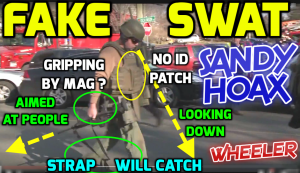 Here’s another video that fully covers the total fakery of the SWAT team actor, who has since been identified as David Wheeler:

I believe in free speech, and “free speech” includes unpopular speech. So I’ve posted Fetzer’s entire book as a PDF document so that you can read it for yourself. I don’t endorse all the findings in the book, but I do think the public shouldn’t be told what they can and cannot read. Thus, I’m posting this mostly as an act of rebellion against censorship.

Remember, the entire establishment says Fetzer is so dangerous that all his books and videos MUST be censored by everyone, from Amazon to YouTube. Don’t you find that intriguing? What information in his books is so “dangerous” that the public must not even be allowed to see what Fetzer wrote for themselves?

Note that I don’t endorse all the views and opinions of Jim Fetzer found in his videos, books and articles, but I do agree with his right to speak. Do we really live in a society where Amazon.com engages in online book burnings? The answer is, “Yes!”

Now YouTube is banning ANYONE who talks to Fetzer

Fast forwarding to today, YouTube is rapidly banning all accounts of anyone who dares talk to Jim Fetzer. In fact, YouTube is going back in time and finding videos posted years ago that might involve Fetzer, and they are banning all videos that provide Fetzer any sort of voice whatsoever.

That’s why I recently reached out to Fetzer to have a conversation about censorship, false flags and the banning of his books and videos. Here’s our lengthy conversation, which has been slightly edited for length and clarity:

You may find Fetzer’s conclusions to be bizarre, but don’t you have a right to hear him speak and decide for yourself?

I’m listing a few links to more of Fetzer’s videos below. This is not an endorsement of these videos but rather an invitation to explore the “most dangerous mind in America” and see why the establishment thinks he’s so dangerous.

Like I said earlier, if Fetzer’s conclusions were obviously total nonsense, why wouldn’t the establishment simply ignore him and allow his own words to prove how wrong he is? Instead, they ban his books, his videos and his speech, then they tell us, “There’s nothing to see here.” So why ban Fetzer in the first place, then?

To see more of Fetzer’s work, take a look at “The Parkland Puzzle: How the Pieces Fit Together”