(Natural News) If you’ve ever wanted to know what it looks like when government continues to insist that it knows what’s best for the people that it claims to represent but doesn’t, look no further than London.

This past weekend, London Mayor Sadiq Khan announced that England’s capital would be cracking down on knives and blades as part of a new “knife control” initiative that he claims will help to reduce the city’s skyrocketing murder rates. Just days ago, London’s murder rate surpassed the murder rate of New York City for the first time in history, despite the fact that the city has some of the strictest gun control laws in the world.

“No excuses: There is never a reason to carry a knife. Anyone who does will be caught, and they will feel the full force of the law,” the Mayor wrote on his official Twitter page. The question, of course, is this: If introducing more laws and restrictions on firearms did nothing to curb murder and violence in London (and in fact resulted in more crime rather than less), what makes them think that more laws and restrictions on knives would be any different? The definition of insanity is doing the same exact thing over and over again and expecting different results, and yet that is exactly what is going on here.

But it’s not just knives that are being stripped away from the people of London; in some cases, it’s anything that’s sharp and could potentially be used as a weapon, even if it’s not a weapon. According to the official Twitter account of the Regents Park Police, a pair of scissors, some pliers and a screwdriver were among some of the tools that were confiscated during a so-called “weapons sweep.” 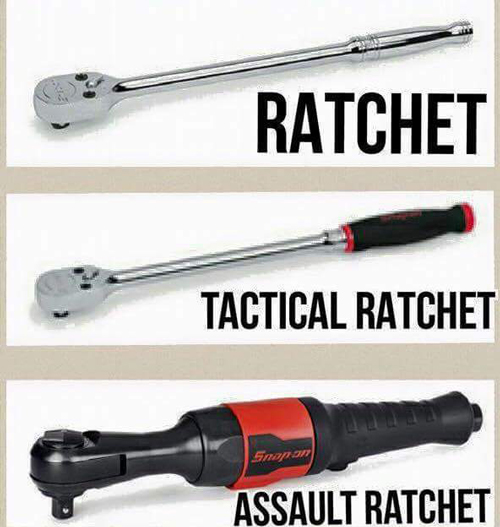 As reported by Hotair.com, another verified law enforcement Twitter account posted a picture of confiscated pruning shears, a kitchen knife, and a common farming tool. Underneath the picture was the following caption: “Officers from @MPSBarnet were over in @MPSEnfield on #opsceptre found these items in ponders end recreation ground #saferEnfield.” Notably, there is no evidence whatsoever that these tools were involved in any violent attack or were used in any other way other than how their manufacturers intended them to be used.

Even though there hasn’t been any concerted effort to introduce knife control legislation in the United States (yet), the big government mentality currently on display in London isn’t much different than the mentality plaguing our own country, especially in the wake of the tragic shooting that occurred at Marjory Stoneman Douglas High School back in February. The mentality is this: The government has all the solutions, and the individual is too stupid to look out for his or her own well-being. (Related: The real goal of eliminating the Second Amendment is obliterate the First Amendment and enslave us all.)

This way of thinking can be described as progressive utopianism – that is, the false idea pushed by liberals in this country and elsewhere that there will come a day where society will be flawless. When progressives talk about living in a country without gun violence (or knife violence, in London’s case), this is utopianism, and while it may sound like a great thing to strive towards, the fact of the matter is that utopia simply isn’t achievable. There will always be gun violence and there will always be knife violence, no matter how much government gets involved in the affairs of man.

Progressive utopianism is essentially empty promises made by lawmakers in exchange for less liberty. In both London and in the U.S., the argument is this: “We can live in a society with little to no crime, but you just have to surrender more of your private property and freedom so that we can get there.” In the end, though, the only end of the deal that is ever upheld is less liberty for the people.

Drug maker Eli Lilly strikes $375 million deal with US government for COVID-19 antibody treatment
Kamala Harris publicly endorses COMMUNISM! … says all outcomes must be equal, embraces core demand of authoritarian government
French president proposes ban on homeschooling to deter “radical” values
The left releases their plan to RUIN AMERICA forever in less than four years if they win in November: The People’s Charter
NYC Mayor de Blasio to furlough 9,000 city employees
Even if Amy Barrett is confirmed to SCOTUS, she’s still a statist who promotes forced vaccinations and indefinite lockdowns
The nanny state of Virginia is “harassing property owners” with constant flyovers using government aircraft looking for pot
New York City trying to borrow more money to avoid laying off 22,000 city employees who are no longer needed — DEBT will only lead to financial DEMISE
Thanks to COVID-19, the sleazy, corrupt inner workings of the U.S. CDC are being exposed
Tennessee government seeks to interrogate every child monthly, preferably without parents present