(Natural News) To the Marxist Left, they should have unfettered use of the Constitution’s personal and civil rights protections, but at the same time, those rights and protections should be denied to anyone who dares to disagree with them.

Their tyranny was on full display again Monday in stepped-up attacks against the National Rifle Association following the latest horrific shooting at a Parkland, Fla., school — an incident in which the NRA had no ties to whatsoever.

Nevertheless, the angry Left (which is a redundant phrase — the Left is always outraged about something) continues to attempt to lay blame on the NRA, even now going so far as to demand complete censorship of all the organization’s media-related outreach.

Mind you, I have little doubt that some of the same lunatics who are now calling for censorship of all NRA-related media have been apoplectic in the past over President Donald J. Trump’s criticism of the American Pravda media (which has a long history of ginning up fake news aimed at undermining his administration).

As reported by Breitbart News, an organization funded by billionaire Michael Bloomberg, Moms Demand Action, wants Amazon, Apple, and YouTube to cut their ties with NRATV, which is, of course, blatant censorship.

And to throw even more hypocrisy and irony into the mix, let us never forget that Bloomberg became a billionaire as a financial media mogul. (Related: Liberals unleash economic warfare to SILENCE conservatives in effort to BAN gun sales.)

In other words, a group he is funding is attempting to deny First Amendment rights to the NRA while using money given them by a guy who became fabulously wealthy thanks to the First Amendment.

You just can’t make this up. 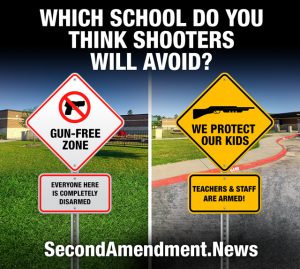 Breitbart noted further that DirecTV, AT&T, Google, and Roku are also being pressured by these Alt-Left authoritarians as well to censor the country’s oldest civil rights organization.

The Huffington Post reported that the organization’s founder, Shannon Watts, said in a statement:

“NRATV is home to the NRA’s most dangerous and violence-inciting propaganda. It’s time for tech leaders to acknowledge their role in helping the NRA spread this dangerous content and cut it out.

“We demand that Apple, Amazon, AT&T’s DIRECTV, Google and Roku all dump NRATV once and for all.”

So, the NRA’s firearms advocacy and educational outreach is “propaganda;” but the BS Watts is running is fact. Only on the insane Left.

She’s not alone, however, as Breitbart reported:

Brad Chase is friends with the father of a Marjory Stoneman Douglas High School shooting survivor. Chase launched a Change.org petition urging Amazon to end its relationship with NRATV. He said, “The NRA has long ignored its role in promoting gun violence and betrayed the names of good and responsible gun owners. It’s time to hold them, and their partners, accountable … a company like Amazon should not be spreading their message.”

What’s more is this young person claims to support the First Amendment but only for himself and other like-minded communists-in-training as he believes “companies like Amazon [give the NRA] an unchecked conduit into American homes.”

Like these companies give the same “unchecked conduit” to fake news central CNN and MSNBC, home to a pair of the most outrageously unhinged propagandists on the planet.

Beyond this mindless speciousness is the utter stupidity in thinking that the NRA had anything at all to do with the Parkland, Fla., school shooting — or any of the previous shootings, for that matter. But when anger melds with indoctrination and propaganda, it’s impossible for human beings to think straight.

Now, more than ever, we need the NRA, President Trump, Republicans in Congress and liberty-minded Americans to push back hard against this politically motivated drive to punish the one organization standing between freedom and tyranny.