(Natural News) The U.S. Nuclear Regulatory Commission (NRC) is responsible for all “policies and regulations governing nuclear reactor and materials safety,” reports NRC.gov. With a budget of $1 billion and 4000 employees, they are also in charge of licensing and litigation issues for the ninety-nine existing nuclear power plants in America. Within the confines of these aging nuclear facilities, reports the Orange County Register, there are a total of ninety cooling pools filled with densely packed spent fuel rods. Every one of these run the risk of “a crippling radioactive release and fire,” exposing us to even more Cesium-137 isotopes.

The number of nuclear fuel rods in these cooling pools has been increasing, says the Union of Concerned Scientists (UCS), because “no permanent repository for spent fuel exists in the United States.” There are several hundred tons of spent nuclear fuel in each of these ninety cooling pools. Because these pools are located in a “secondary containment of the reactor,” the stored radioactive material is more vulnerable to natural disasters and terrorist attacks. But when the NRC crafted their action plan as a response to Fukushima, they ignored these potentials. Additionally, according to Science Daily, researchers at Princeton University and UCS have published a paper in Science Magazine claiming the NRC used a “flawed analysis to justify inaction,” leaving millions of Americans at risk of a radiological release.”

The NRC made no recommendations for existing nuclear facilities to transfer spent fuel rods into dry casks, which would reduce the chance of fire by 99 percent. Rods could be moved at a cost of $50 million, but the NRC claimed it’s not worth the cost. Additionally, they surmised that if a spent pool fire did break out, which they believe is highly unlikely, the radioactive contamination wouldn’t travel over fifty miles, any environmental clean up would take only a year and the total damages would cost $125 billion. They can’t be serious. Is the NRC even monitoring what is still going on with the spent fuel rods in Fukushima?

When the UCS and Princeton researchers did the numbers they were much more realistic. They hypothesized about a radioactive fire at the “high density spent fuel pool at the Peach Bottom Nuclear Power Plant  in Pennsylvania.” In their projections, “four major cities would be contaminated (New York City, Philadelphia, Baltimore and Washington, D.C.), resulting in the displacement of millions of people.” The price tag would be $2 trillion. 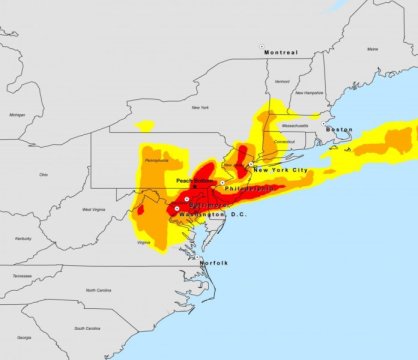 It’s not difficult to comprehend the disconnect between propaganda pieces produced by a government agency compared to reports published by scientists who seek the truth. Frank von Hippel, a senior researcher at Princeton’s Program on Science and Global Security, is a co-author of the report. Here’s his explanation:

“The NRC has been pressured by the nuclear industry, directly and through Congress, to low-ball the potential consequences of a fire because of concerns that increased costs could result in shutting down more nuclear power plants. Unfortunately, if there is no public outcry about this dangerous situation, the NRC will continue to bend to the industry’s wishes.”

Despite the ongoing environmental catastrophe emanating from the Fukushima disaster, World-nuclear.org reports that for the nuclear industry, it’s business as usual. In fact, thanks to the NRC, the U.S. is expecting that “four more [nuclear] units will come online by 2021.”

When will they ever learn?