(Natural News) Just in case Hurricane Harvey and the catastrophic Houston flooding incident didn’t wake up enough Americans to the importance of preparedness and survival planning, Hurricane Irma has just achieved “beast” status with 180 mph super winds that easily put it at a category 5 superstorm.

According to the National Hurricane Center:

Irma is a potentially catastrophic category 5 hurricane and will bring life-threatening wind, storm surge, and rainfall hazards to portions of the northeastern Leeward Islands beginning later today and the Virgin Islands and Puerto Rico beginning tomorrow. Preparations should be rushed to completion before the arrival of tropical-storm force winds later today in the Leeward Islands and tomorrow morning in Virgin Islands and Puerto Rico.

As reported by ClickOrlando.com, Floridians are in a state of total panic because almost none of them thought to prepare before now:

“(It was) a little bit of a pandemonium,” shopper Diane Williams said. “Getting here was worse than being inside. It’s just that everybody is panicked, so they are preparing, which is wise, but it’s just, like, crazy.”

Store shelves are already being stripped bare at Walmart and other retailers, according to media reports. Generators are completely sold out at Home Depot and other stores, too. 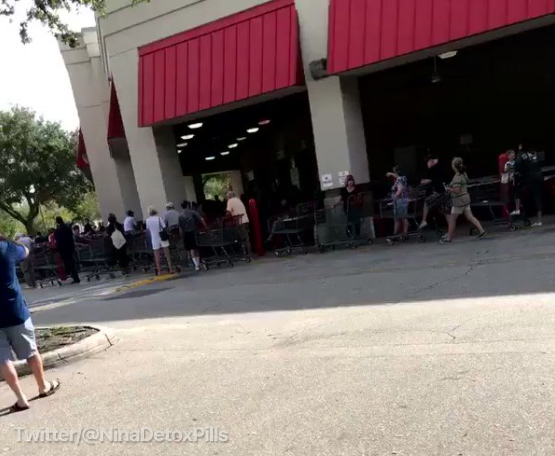 You can find many emergency preparedness and survival items at the Health Ranger Store.

Only fools wait for an emergency to begin panic preparedness

As Michael Snyder correctly points out on The Economic Collapse Blog, it’s only fools who are suddenly panicking because they failed to prepare before the arrival of an imminent crisis:

Those that wait until the last minute are going to find that there is nothing left for them… Of course those that have been preparing all along don’t have to run out to the store in a panic.

Case in point: When Hurricane Harvey hit Texas, I didn’t have to prepare at all. I was already fully prepared with food, water and even a backup PTO generator attached to my tractor. That PTO generator was a lifesaver, it turns out, when the power went down. Instead of freaking out, I just started up the tractor, plugged in the power cable to the PTO-driven generator, and threw the transfer switch. We had full power for as long as we wanted to burn diesel (which has a very long shelf life).

Because I didn’t have to panic, we spent a lot of time working on ways to help others. That’s how the Health Ranger Store, with the support of our many fans and readers, was able to raise over $60,000 for victims of Hurricane Harvey (checks are being cut today and delivered to local non-profits over the next several days).

The lesson here? If you’re prepared, you can assist in the recovery efforts instead of adding to the disaster burden. Even so, the mainstream media has, for many years, mocked preppers with “tin foil hat” characterizations and defamatory hit pieces. As it turns out yet again, the preppers were the geniuses after all.

The Health Ranger Store offers hundreds of preparedness items that are IN STOCK and ready to ship. Click here to see the survival and preparedness gear that’s available right now.

Wherever you are, don’t wait for a crisis to start preparing

As we just found out during Hurricane Harvey, those who are well prepared against natural disasters can make it through almost anything. Those who fail to prepare, on the other hand, become desperate (and even dangerous) when a crisis strikes. The greatest threat to any city, it turns out, isn’t a natural disaster but rather the lack of preparedness among its citizens.

When people don’t prepare, they create a massive humanitarian burden on local law enforcement and emergency responders. Every person who fails to prepare becomes a burden on the system. But those who prepare in advance are in a position to help others in need. Despite this simple fact, the mainstream media has condemned preppers as “hoarders” who were blamed for stocking up on essential supplies like food, water and ammunition to be deployed against looters.

No wonder the entire mainstream media is widely labeled fake news. They have been pushing an anti-preparedness message for years, contributing to the humanitarian disasters now unfolding in Texas and Florida. Once again, the globalist-run media proves it is the enemy of the American people.

Here are several websites that can help you stay informed about preparedness and survival. Visit Censored.news for near-real-time updates from across the independent media:

The bottom line? Stay informed. Get prepared. These storms are nothing compared to the total chaos that will be witnessed if North Korea sets off an EMP weapon above the United States (or if the stock market crashes). What you’re witnessing right now in Houston and Florida will encompass every city across the nation.