(Natural News) When most Americans hear the term “charitable organization” they visualize a group that exists to unconditionally help people in their hour of need.

Well, in the hyper-politicized environment we live in today, at least one “charitable” organization has established certain parameters for providing assistance.

Namely, the group isn’t about to help anyone who has been victimized by Hurricane Harvey because they live in a “red state” full of awful conservative types.

As reported by Breitbart Texas, a social media staffer for the tax-exempt organization Charitable Humans tweeted a hate-filled series of messages as Harvey bored down on the east Texas coast, claiming that “God” and “the Republican Party” are too deeply rooted there and as such, do not deserve to be helped.

“I just can’t bring myself to even consider providing aid to any red state, let them clean up their own mess,” tweet noted.

“Why? They have God and the Republican party to help them. Red states hate handouts, let’s not offend them,” the staffer continued. “It’s not wise to be generous to sociopaths that will never return it in-kind. Red states screwed themselves.

“Any state that elects a Republican needs to be incinerated, there have [sic] to be severe consequences,” the staffer continued. 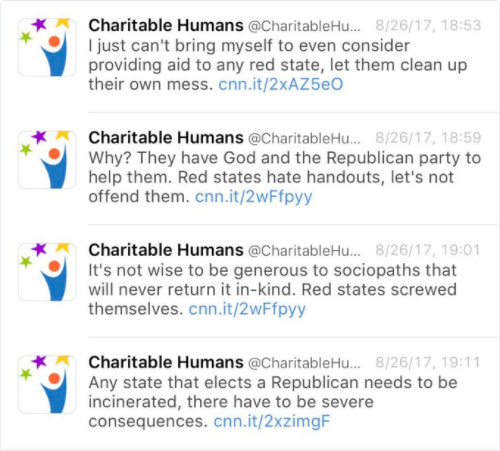 In response, someone named Twirl La Deplorable tweeted: “Charitable Humans…not so charitable nor so human. Pathetic they hide/delete their acct, can’t even stand by their evil stmt. #houstonflood”

For its part, the charity did issue an apology and a statement:

There are no words to express the distaste and hateful words that our Social Media Coordinator unleashed on what was supposed to represent Charitable Humans, an organization that has engaged in global humanitarianism activities in war-torn and severely impoverished nations since 2005. The purpose of our charity was, and so remains, to make the world a better place by focusing on a larger mandate of cultivating a global citizenship initiative along with an online platform for active engagement, and a platform to help people and nonprofit organizations like ours further the reach and impact of good deeds.

For the record, Republicans/conservatives are historically the most charitable people in the country, regularly out-donating liberals in so-called blue states. Though liberals are known for being “bleeding hearts” who claim to ‘care more’ about those in need, conservatives actually act on their concern for the needy, as The Daily Caller noted in a 2010 article:

If you talk to most liberals, they’ll tell you that conservatives are insensitive, callous and selfish.  To their own detriment, leftists tend to believe that those on the right simply don’t care about the less fortunate.  While this doctrine has been embedded in left-leaning gospel for decades, research and reality paint a very different picture — one that has perplexed many of the left’s self-proclaimed “compassionates.”

A follow-up piece in 2012 by the Western Journalism Center confirmed the earlier findings that conservatives are more charitable than liberals.

But even if that weren’t the case, denying someone assistance on the basis of their political beliefs is horrendously callous and cruel. And in this case, it’s incredibly stupid, given that not everyone in Texas votes for Republicans, as evidenced by the fact that the state has Democratic leaders as well. (Related: Preppers take notice: Left is using “racism” and “bigotry” to justify starting the next civil war.)

And while the leaders of Charitable Humans obviously do not share the opinion of the staffer (who, I assume, was fired…and if not, why not?), his or her tweeted comments are representative of the massive political, social, and cultural divisions that currently plague our country. It’s why fewer and fewer Americans believe our differences can ever be reconciled.

Previous :Racially paranoid Leftists now claim soap dispensers are racist because they only respond to white skin
Next : Hurricane Harvey proves again why it is foolish if you don’t become a prepper
Receive Our Free Email Newsletter

BUSTED: Democrats are intentionally withholding assistance and supplies to illegal minors at the border so they can blame Trump for “caging children”
Government shutdowns are deliberately weaponized to harm the People, even as the ruling class remain unaffected
Researchers develop “smart trousers” – pants with artificial muscles for people with mobility problems
Left-wing charity called Charitable Humans refuses to provide assistance to people in Texas, claiming it’s a “red state”