Survival report from inside Hurricane Harvey: The flooding has begun… and it’s brutal

(Natural News) I’m posting this “survival report” from inside Hurricane Harvey because everybody I know has been asking if we’re okay in Central Texas.

I’m happy to report that I am writing this from inside the spiral arms of Hurricane Harvey, and although significant damage has occurred in a few areas (such as Rockport on the Coast), Central Texas is doing much better. However, the flooding began about 12 hours ago as rivers and creeks started spilling their banks in just the last few hours. The rain is relentless, and we’re expecting at least another 12 inches of rain today, on top of the 12 inches we already received yesterday.

The serious damage was initially limited to the direct path of the Hurricane eye, but this is rapidly changing as the damage vector transitions from wind to floods. I’m expecting the next 24 hours to be truly brutal, even for those communities far from the coast.

We’ve lost power twice already. Fortunately, I run a 1976 John Deere diesel tractor with a PTO-driven generator that feeds the entire property. I also have a large transfer switch installed, so when the grid goes down, I just fire up the tractor and throw the transfer switch. That’s how I’ve stayed online so far. But internet and cell phone services have been spotty. We’re often completely cut off from everything, including 911 if an emergency were to occur. Many of the roads are flooded out, and a Sheriff couldn’t reach you even if they wanted.

The rain, by the way, is warm. It’s definitely sun-heated Gulf water. Even when it falls on you, it’s comfortably warm, and you can be soaked with it for hours without feeling cold (as long as you’re moving around, anyway). At least we don’t have hypothermia to deal with in all this.

This might be one of those few storms where the scare stories are wisely heeded. Still, we haven’t yet seen widespread fatalities. In apparent expectation of a mass death event, the Mayor of one Texas town told people to write your social security number on your arm so that authorities can identify your body if you choose not to evacuate. The implication, of course, was that if you didn’t flee the area, you were sure to die. Let’s hope the Mayor is wrong.

According to local news reports, 40% of the population did not evacuate the area at all. They may soon regret staying put, however, as the flood waters rise to insane levels. The Colorado river, which runs through much of Central Texas, is already surging higher and is now sweeping across not just roads but also highways. Nearly all travel in this area is now at a standstill.

I’m writing this from inside the “hurricane” right now, and what I’m seeing in Central Texas at this very moment is relentless rain, rapidly rising rivers and streams, and steady 35 – 45 mph winds with gusts above 50 mph. At this point, it’s truly a “survival” scenario for all of us.

This isn’t the first time all this has happened, of course. Check out the track map below, showing 100 years of Gulf Coast hurricanes that struck North America. There’s something you might notice in this track that will hopefully surprise you:

… the greatest intensity of hurricanes occurred in the 1930s and 40s!

In fact, a major hurricane hasn’t struck the continental United States in 12 years. 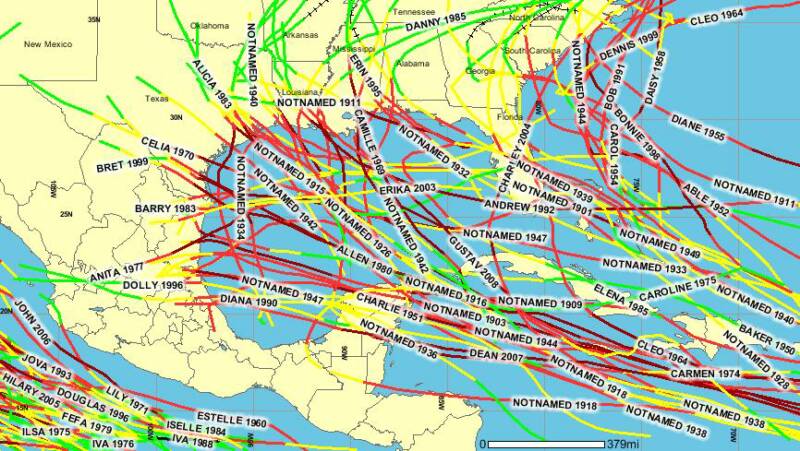 The big difference between then and now is that most hurricanes in the 1930s and 40s didn’t have names. And the internet didn’t exist either, so people didn’t have a much opportunity to “socially freak out” with fear.

The modus operandi of the mainstream media has become 24/7 all-out panic and hysteria because that’s the only thing they have remaining after destroying their own credibility with endless fake news over the last year. The sober truth of the matter is that Hurricane Harvey is pretty damn nasty if you’re in it, but mass hysteria isn’t the practical solution to surviving it. As always, the correct answer is to be prepared. Be ready in advance, take all necessary precautions, have a stockpile of food, water, fuel, medicine, etc., and make sure you own a gravity water filter like the Big Berkey.

If a hurricane turns your home into rubble, there’s not much you can do about that, but most buildings built to appropriate engineering standards are surviving Harvey so far.

Now for the flooding… the next few days should be bloody Hell. I’ll continue to report from the disaster zone as long as I’m still online. If you’re concerned about my personal safety, don’t worry: I’m a survivor. We’re doing fine. I’m more concerned about how I’m going to be able to help others with emergency food supplies and other survival gear. At the moment, there’s not even any way to get that gear to anybody.

Remember this as you’re thinking about your own prepper strategies. When the day comes that you need help, even those who want to help you might not be able to reach you.

Hence the wisdom of preparing in advance for everything.

I’ll post most news as I’m able to get online. Thank you for your prayers.