Fraud-proof your bank accounts with these anti-identity theft hacks

(Natural News) Fraud and identity theft remain among the biggest security hurdles faced by global banks. In fact, a report by Insider Monkey lists a great number of well-established and developing countries where these criminal schemes run rampant. The report lists Mexico, the U.S. and the United Arab Emirates, as well as China and India, as the top five countries where fraud and identity theft continue to cause serious security issues.

Other countries where these criminal activities persist include Canada, Brazil, and Singapore, as well as South Africa and the U.K. According to the report, the most common denominator among these countries appears to be the preference for online banking. The report reveals that online banking provides a fresh trail for hackers to gain access to a user’s personal account and banking history, which in turn makes for a perfect recipe for fraudulent activities.

In the U.S alone, fraud and identity theft unsurprisingly top the most common banking concerns among customers. According to the Federal Trade Commission’s Consumer Sentinel Network Data Book for January-December 2014 report, fraud was the number one banking complaint among U.S. consumers, at a whopping 60 percent. This was followed by identity theft at 30 percent. That report also noted that self-reported victims of fraud lost a total of $1.7 billion. In addition, the report revealed that government documents/benefits fraud was the most common form of identity theft. This was followed by credit-card fraud and bank fraud.

This is how fraudsters steal a user’s identity

According to the information security website Security Intelligence, fraudsters typically create synthetic identities to carry out their criminal activities. The website notes that identity thieves create these fictitious identities by incorporating real and fabricated information. In creating a synthetic identity, fraudsters will typically use a real Social Security number (SSN) and pair it with a name not associated with the SSN. Fraudsters will target numbers that are not actively used such as those of children and deceased individuals. This will then enable them to fake the identity using the SSN details.

The website also reveals that there are three ways that fraudsters use synthetic identities to carry out their criminal activities. According to the website, they scrape data from credit reporting agencies (CRA) when consumers finish a bank transaction. The identity thieves then use the gathered data to execute fraudulent activities such as: 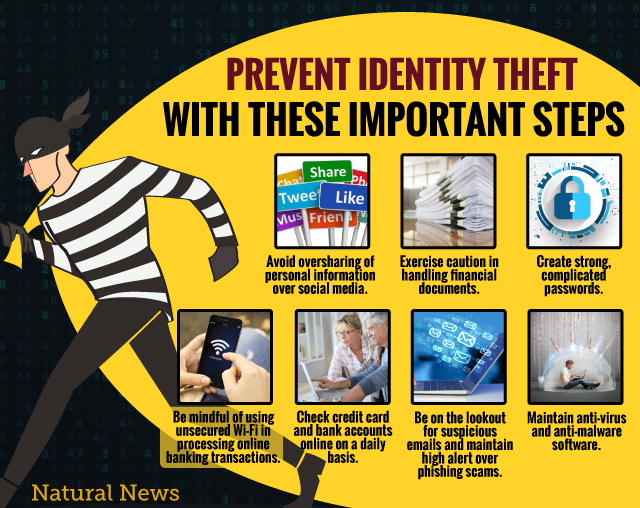 In addition, using products that inhibit radio frequency identification (RFID) are also useful in protecting your identity. Credit cards, passports and debit cards all contain RFIDs, which can easily be scanned in some of the most inconspicuous places such as at stadiums, airports and train stations. Using RFID-blocking products such as The Ranger Gear RFID Blocking Wallet and The Ranger Gear RFID Blocking Sleeves Pack may prove to be worthy long-term investments to protect yourself from fraudulent activities.

Next : 9 Toxic ingredients found in your mouthwash … Are you accidentally ruining your teeth?
Receive Our Free Email Newsletter

While financial institutions cut off pro-Trump customers, a credit union has just been launched that offers financial services to transgenders and LGBT advocates
Bank of America defends making 170 donations to Planned Parenthood abortion company
Questions for Chase (away) Bank
Fraud-proof your bank accounts with these anti-identity theft hacks