(Natural News) Up-and-coming crybullies take note: If you really want to master the art of crybully tactics, watch and learn how Kathy Griffin does it.

First, Kathy makes a death threat against the President of the United States by holding up a bloody, decapitated head of Donald Trump, in effect encouraging hatred, violence and death against her intended target.

Next, after the backlash avalanche informs Griffin of what a pathetic, vile, disgusting, hate-filled Left-wing reprobate she is, she issues a half-apology to “anyone who was offended” but never apologizes to President Trump.

Once CNN cuts ties with her — because even CNN isn’t yet insane enough to tie themselves to the insanity of left-wing terror jihad against the President — Kathy Griffin cries foul, claiming that President Trump is destroying her career.

Finally, Griffin hosts a press conference during which she breaks down into tears and claims “old white guys” are trying to ruin her.

What’s next? Did the Russians hack her brain and MAKE her do it? Perhaps Griffin will join Hillary Clinton in broadcasting a never-ending list of excuses that cast blame in every direction possible in order to avoid taking responsibility for her own actions. The art of the crybully, you see, is all about being a violent bully while always claiming to be the victim. 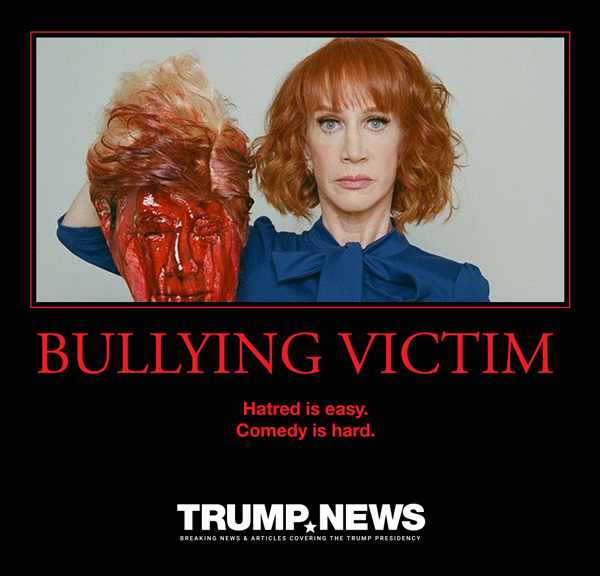 "What is happening to me has never happened, ever, in the history of this great country," Kathy Griffin says https://t.co/T5uqozQu3e pic.twitter.com/py15gGkACc

It’s all spontaneously “happening” to her and she had nothing to do with it!

According to Kathy “Crybully” Griffin, “What is happening to me has never happened, ever, in the history of this great country.”

RIIIIGHT. Notice the passive voice? It’s all happening TO HER. She didn’t do anything. She’s pretending she didn’t hold up the bloody, decapitated head of the United States President and broadcast her message of hatred, violence and death to the entire world. Nope, Kathy Griffin is the victim here, you see. It’s all happening to her, totally out of her control. She did nothing, and she’s bewildered as to why everybody is targeting her with death threats. Gee, she really has no clue that she started the death threats?

Furthermore, Kathy Griffin hates this country. Like all insane, delusional Leftists, she’s anti-America, anti-Constitution, anti-Trump and anti-liberty. She despises liberty, tolerance and the rule of law. And she literally wants all her political opponents to DIE. Yet according to her, she’s the victim here!

Now you see how the Left is going to attempt to overthrow the country. Like every socialist / communist revolution in recent memory, they will mass murder their political opponents while screaming “We are the victims.” This is the level of derangement that has now been achieved by the delusional, insane, violent, mentally ill Left. (See Intolerance.news for more stories on all this.)

Griffin: “Happy to deliver beat down” to Barron Trump, a young boy

Remember, Kathy Griffin previously said she was “happy to deliver a beat down” to Barron Trump, a young minor. Griffin had no problem assaulting the psyche of an innocent boy… she was proud of it! 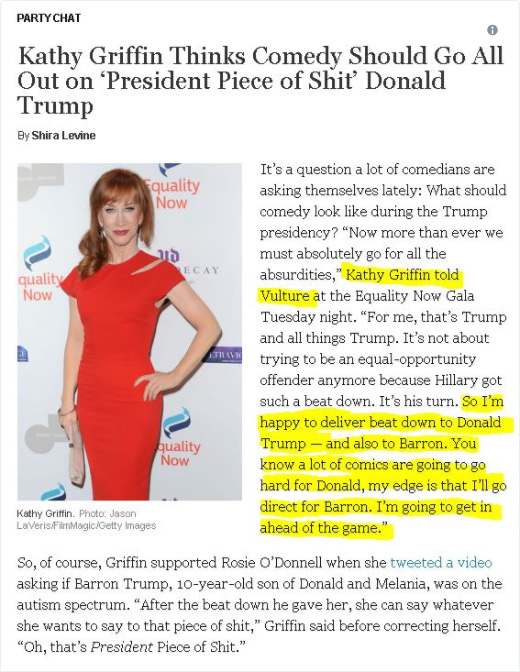 In a time when most people are desperate to witness a de-escalation of all the insanity and violence in our world, isn’t it interesting that Kathy Griffin thinks it’s a brilliant idea to add more gore, violence and death imagery to our collective consciousness, even targeting young children in the process? All this from a liberal culture that absurdly claims it has a monopoly on peace, compassion and tolerance… (in reality, Leftists are the new racists, bigots and intolerant, violent fundamentalists).

As I wrote in a recent Natural News article:

There’s no other way to say it: Kathy Griffin and the deranged, lunatic Left are mentally ill and pose a very real danger to society. This wretched, terrorist-style beheading video posted by Griffin encourages deadly violence against Trump supporters and sends a message that murdering political opponents of the intolerant Left is a normal, acceptable activity.

That’s what the deranged Left already believes, of course. Fanned into flames by a wildly dishonest, discredited fakestream media, Trump Derangement Syndrome has now escalated into a left-wing murderous rage that now celebrates gruesome images of beheadings that were once the sole domain of fanatical terrorists. What’s even more disturbing about all this is that Kathy Griffin apparently thought posting a video showing a bloodied, decapitated Trump head in her fist would somehow be hilarious or inspiring in some twisted way.