GLOBAL COOLING is coming, and we’re all DOOMED, warned NYT, WashPost, TIME, Cal Tech and the entire MSM throughout the 1970s

(Natural News) If you’ve been suckered into believing the false narrative of man-made “global warming” or “climate change,” you’re probably not old enough to remember the global cooling propaganda fear campaign of the 1970s. (Al Gore is counting on the public having a really short memory, by the way, and he hasn’t been disappointed.)

Throughout the 1970s, every university scientist was taught that the Earth would soon be covered in ice sheets, that crops would fail, populations would collapse and human civilization would suffer mass starvation. What was the cause of all this? Human activity, of course, which caused “pollution” that made the world cooler, claimed the experts.

If you’re not old enough to have witnessed all this, you might think the whole “climate change” narrative is some big, new, scary emergency that has suddenly emerged and needs dire attention. But it turns out that the fake news mainstream media runs a climate scare every generation or so, sometimes claiming the Earth is “cooling” and other times insisting it’s “warming.” They can’t both be true, obviously, which is one important clue that tells you just how much they’re lying about so-called “climate science.” (It’s also why they have reverted to “climate change” instead of “global warming” so that they can insinuate every tornado, hurricane, rain storm or earthquake is ridiculously caused by carbon dioxide.) 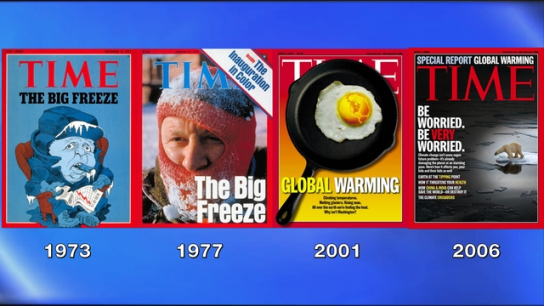 In 1975, the New York Times warned about global cooling being “inevitable” and dangerous

Check out the news clips below, including some scans and images from old newspaper archives (see below).

Some of the sources for this research include: MRC.org/node/30586 , stevengoddard.wordpress.com

November 15, 1969, Science News:
Meteorologist Dr. J. Murray Mitchell Jr: How long the current cooling trend continues is one of the most important problems of our civilization…

May 21, 1975, New York Times:
Scientists Ponder Why World’s Climate is Changing: A Major Cooling Widely Considered to Be Inevitable

January 11, 1970, Washington Post:
Colder Winters Held Dawn of New Ice Age: get a good grip on your long johns, cold weather haters – the worst may be yet to come…

December 29, 1972, New York Times:
[T]he “mantle of polar ice increased by 12 percent” and had not returned to “normal” size. North Atlantic sea temperatures declined, and shipping routes were “cluttered with abnormal amounts of ice.” Furthermore, the permafrost in Russia and Canada was advancing southward, according to the December 29 article…

February, 1974, Fortune Magazine:
Climate – the Heat May Be Off: …despite all you may have read, heard, or imagined, it’s been growing cooler – not warmer – since the Thirties

June, 1974, TIME Magazine:
Climatological Cassandras are becoming increasingly apprehensive, for the weather aberrations they are studying may be the harbinger of another ice age. … unexpected persistence and thickness of pack ice in the waters around Iceland.

1975, Newsweek article “The Cooling World”
This article promoted “solutions” to global cooling “such as melting the arctic ice cap by covering it with black soot or diverting arctic rivers.”

1975, from Nigel Calder, former editor of New Scientist:
The threat of a new ice age must now stand alongside nuclear war as a likely source of wholesale death and misery for mankind…

1976 Lowel Ponte book, “The Cooling“:
The cooling has already killed hundreds of thousands of people in poor nations… [global cooling would lead to] world famine, world chaos, and probably world war, and this could all come by the year 2000.

Feb. 16, 1979, The Age
Preparing the world for a new Ice Age: “…the next Ice Age… Droughts, floods, the failure of monsoons and the run of hard winters are all evidence, they say, that the world has come to the end of a spell of even-tempered weather which began in about 1910…” 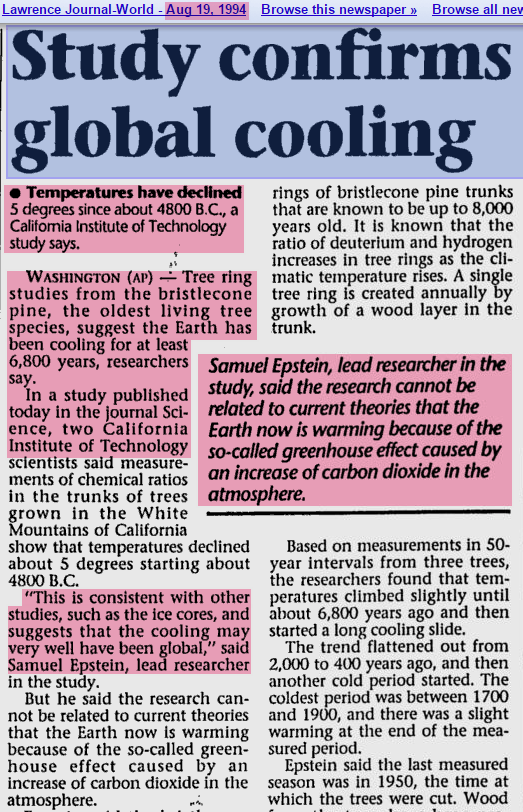 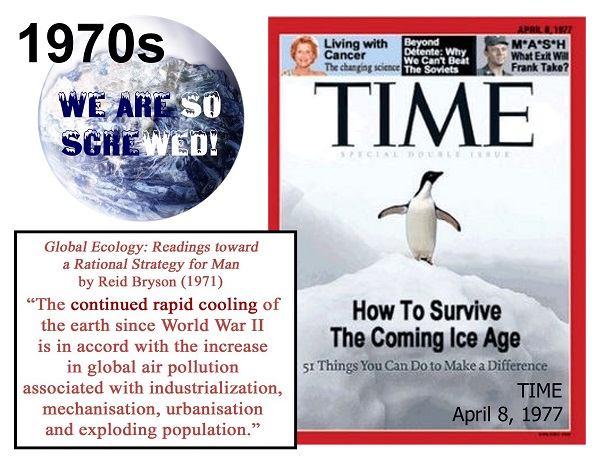