(Natural News) As reports of mumps continue to spread across the United States, particularly in schools, it seems that even the pro-vaccine crowd has been forced to reluctantly admit that many of the people being stricken by the disease are, in fact, vaccinated. For example, Pennsylvania State University recently noted that the majority of their students who have contracted mumps are those who had already received the two CDC recommended vaccine doses. The college also warned that the vaccines are not 100 percent effective — just in case that hadn’t already become clear.

The CDC itself is aware that the MMR vaccine is not infallible. Their page on mumps explains, “Two doses of the vaccine are 88% (range: 66 to 95%) effective at protecting against mumps; one dose is 78% (range: 49% to 92%) effective.” They go on to note, “Outbreaks can still occur in highly vaccinated U.S. communities, particularly in close-contact settings.”

Even the left-wing Washington Post has admitted that many of the mumps cases being seen this year are occurring in populations with a high vaccination rate. But, the mainstream media is still singing the praises of vaccines, persisting that these inoculations are the best way to fend off disease.

Of course, as this chart from the CDC shows, some years are better than others for mumps: 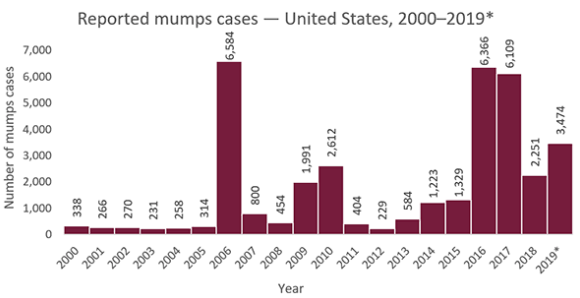 But still, the vaccine-obsessed are crying for more: U.S. officials are now considering adding a third vaccine dose to the current recommended MMR vaccine schedule.

The irony of it all is the fact that Merck’s MMR vaccine is truly nothing more than a hoax. As Mike Adams, the Health Ranger, first reported in 2012, two of the company’s former employees filed a federal complaint against the company for their misconstruction of data related to their vaccine and its effectiveness.

Virologists Stephen Krahling and Joan Wlochowski, who filed the complaint, explained that Merck had to re-certify the mumps portion of the MMR vaccine in 2000, but that the component failed to pass testing. This prompted the company to change their testing parameters and procedures multiple times to ensure that they would get the desired result of 95 percent efficacy.

Essentially, the vaccine failed to pass their regular testing protocol, and rather than work to fix the vaccine — Merck chose to tweak their testing protocols and abandon “gold standard” scientific methods to make it look like the mumps portion worked better than it really did.

As Rosemary Mathis from Sane Vax, Inc. reports, “By combining the very low levels of human antibodies with animal antibodies, a much higher total level of virus neutralization was obtained than could occur from human antibodies alone. The human antibody levels alone would never protect in the real world against wild mumps.” By adding animal antibodies and doctoring their testing protocols, Merck was eventually able to manipulate the results to show ample efficacy.

Drs. Krahling and Wlochowski say that when they attempted to stop what they saw as “wholesale fabrication of test data to reach its preordained 95% efficacy threshold,” they were met with fierce and formidable opposition from Merck, and Dr. Krahling was even threatened with jail time if he informed the FDA of what was going on. [RELATED: Learn more about fraudulent science research at FakeScience.news.]

There is even reason to believe that the vaccine itself could be contributing to the repeated outbreaks that are occurring across the U.S.

Merck still continues to purport that their MMR vaccine is “95 percent effective” to quash competition and keep their position in the marketplace — even though they know that simply isn’t true. While the court case is still ongoing, we can only hope that justice will eventually be served.

Previous :EPA Chief admits that carbon dioxide is not a primary contributor to global warming
Next : Are patients dying from chemo and not cancer itself?
Receive Our Free Email Newsletter

CDC vote to add covid jabs to childhood immunization schedule “is corruption,” says Dr. Robert Malone
CDC to add covid “vaccines” to childhood immunization schedule despite near-zero risk of covid among children
Vaccines never prevented the transmission of COVID
CDC stands for “Child Death Cult” … nationwide child sacrifice ritual disguised as “immunization”
The ACIP vote today and what this means
US, China still ignore natural immunity despite studies proving its efficacy
CDC is about to add covid-19 vaccines to the childhood immunization schedule, creating total liability protection for Pfizer & Moderna
Covid vaccine corruption and LIES are too much even for Paul Offit – he says “the fix was in”
Uganda declares three-week lockdown in two districts amid new Ebola outbreak
Conflict of interest: PR firm representing Moderna and Pfizer is also working with the CDC to push vaccine propaganda