(Natural News) In its latest attempt to smear President Trump and call him a liar, the NY Times has gone to war with none other than the NY Times.

After Trump tweeted on Saturday that the Obama administration had “bugged Trump Tower,” the entire fake news media (CNN, WashPo, NYT, etc.) declared Trump offered “no evidence” to back up his assertion.

Never mind the fact that the entire Russian “conspiracy” narrative still being childishly pushed by the left-wing media is based on no evidence whatsoever. It turns out that Trump actually had plenty of evidence that his operation was being surveiled by the Obama administration… and that evidence was documented by none other than the NY Times itself! (Also worth reading is this compilation of evidence that Obama spied on the Trump campaign, via Mark Levin. Definitely an important read.)

Now, it appears the NY Times has turned on itself and decided to essentially declare itself to be “fake news” for daring to report on January 20, 2017, an article entitled, “Wiretapped Data Used in Inquiry of Trump Aides.” (See links below.)

Even more astonishingly, the very same NY Times writer who penned that story in January is now one of the writers contradicting that story in a new hit piece aimed at Trump entitled, “Trump, Offering No Evidence, Says Obama Tapped His Phones.”

The writer’s name is Michael S. Schmidt, and we are all wondering if he is schizophrenic or perhaps suffering from multiple personalities. Or maybe the far simpler explanation is just that the NY Times twists its daily reporting to fit whatever dishonest narrative the quack journalists on the Left are pushing at the moment. That’s the problem with being a left-wing operative pretending to be a journalist: You’re driven by an “ends justify the means” hysteria that abandons all journalism ethics or attachment to reality.

This is all explained in fascinating detail by writer Jeff Dunetz at The Lid, whose story is printed below (click here for the original source). 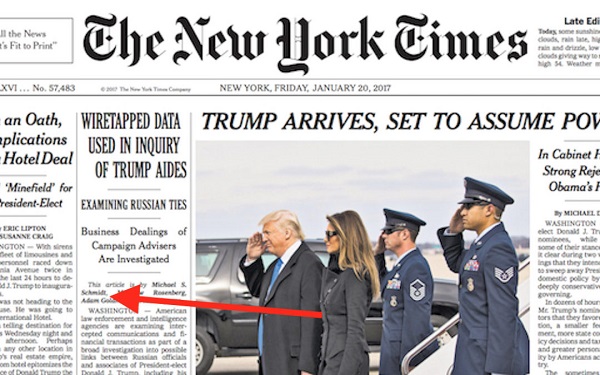 by Jeff Dunetz at The Lid

On January 19th and 20th 2017, The NY Times reported that wiretaps of people on the Trump team were passed along to the Obama White House, one of the story’s authors was Michael S. Schmidt. On Saturday that same Michael S. Schmidt was one of the reporters who wrote the story, “Trump, Offering No Evidence, Says Obama Tapped His Phones.” That’s right, the same NY Times reporter who was one of the sources for the President’s claim, said that there was no evidence for the claim.

The first story by Mr. Schmidt appeared on the NY Times website the evening of January 19, 2017 and appeared on the front page of the paper the morning of Inauguration Day, January 20, 2017:

The continuing counterintelligence investigation means that Mr. Trump will take the oath of office on Friday with his associates under investigation and after the intelligence agencies concluded that the Russian government had worked to help elect him. As president, Mr. Trump will oversee those agencies and have the authority to redirect or stop at least some of these efforts.

It is not clear whether the intercepted communications had anything to do with Mr. Trump’s campaign, or Mr. Trump himself. It is also unclear whether the inquiry has anything to do with an investigation into the hacking of the Democratic National Committee’s computers and other attempts to disrupt the elections in November. The American government has concluded that the Russian government was responsible for a broad computer hacking campaign, including the operation against the D.N.C.

The counterintelligence investigation centers at least in part on the business dealings that some of the president-elect’s past and present advisers have had with Russia. Mr. Manafort has done business in Ukraine and Russia. Some of his contacts there were under surveillance by the National Security Agency for suspected links to Russia’s Federal Security Service, one of the officials said.

Mr. Manafort is among at least three Trump campaign advisers whose possible links to Russia are under scrutiny. Two others are Carter Page, a businessman and former foreign policy adviser to the campaign, and Roger Stone, a longtime Republican operative.

The F.B.I. is leading the investigations, aided by the National Security Agency, the C.I.A. and the Treasury Department’s financial crimes unit. The investigators have accelerated their efforts in recent weeks but have found no conclusive evidence of wrongdoing, the officials said. One official said intelligence reports based on some of the wiretapped communications had been provided to the White House.

Counterintelligence investigations examine the connections between American citizens and foreign governments. Those connections can involve efforts to steal state or corporate secrets, curry favor with American government leaders or influence policy. It is unclear which Russian officials are under investigation, or what particular conversations caught the attention of American eavesdroppers. The legal standard for opening these investigations is low, and prosecutions are rare.

On Saturday, the day the POTUS tweeted that he was wiretapped, the NY Times claimed President Trump had no evidence. If you look at the bi-line of the story, you will see the same Michael S. Schmidt:

Either the Times editors and Mr. Schmidt are trying to skew the story, or they are all suffering from a form of dementia and have no memory.