(Natural News) As the whole world is rapidly discovering, Google completely blacklisted the Natural News website two days ago, de-listing 140,000+ pages of content in the internet’s most outrageous example of a politically motivated silencing of free speech.

In order to justify the censorship of the entire Natural News website, Google has cited an obscure technical rule that bans the use of certain third party advertising networks. Javascript for one of those networks was included in just 13 blogger pages buried in posts from 2013 – 2014 inside the blogs.naturalnews.com subdomain. Intriguingly, the only reason that blogger even used that ad code was because Google banned Adsense from blogs.NaturalNews.com, forcing bloggers to find alternative ad code.

Now, Natural News investigators have found the exact same “violation” scripts running on none other than Google’s own Blogspot network.

This proves that Google is selectively enforcing its “technical” rules against Natural News while allowing its own blogspot sites to remain active, indexed and fully represented in Google search results!

The third party advertiser code in question is known as “YESADVERTISING” and the domain name called by the javascript is cpxcenter.com. This is not any form of advertising that we use on the Natural News root domain, but it’s something that a lone blogger added to her blog articles. Again, we can only find a grand total of 13 blog posts under the blogs subdomain that even used this code. Yet Google banned 140,000+ pages of our root domain!

A Natural News investigation has found that the Google-owned Blogspot blog known as “Breaking News Lines” is running the exact same code. You’ll find that site at:

Here’s a look at the website, clearly hosted by Blogspot.com, a Google-owned property:

And here’s a look at the source code of Breaking News Lines which shows the javascript code from cpxcenter.com: 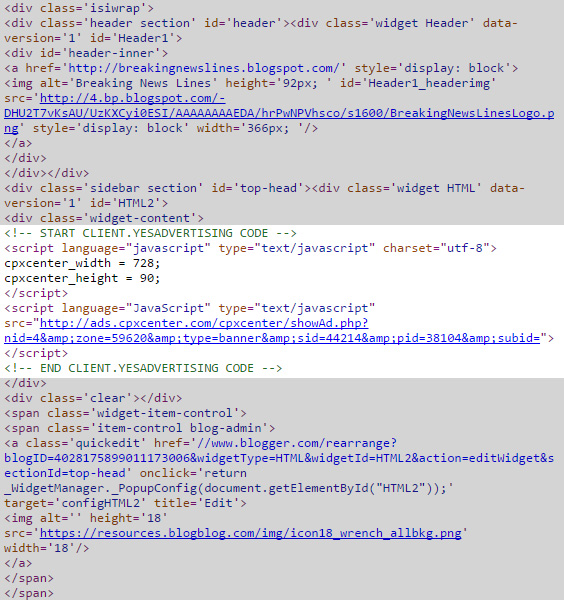 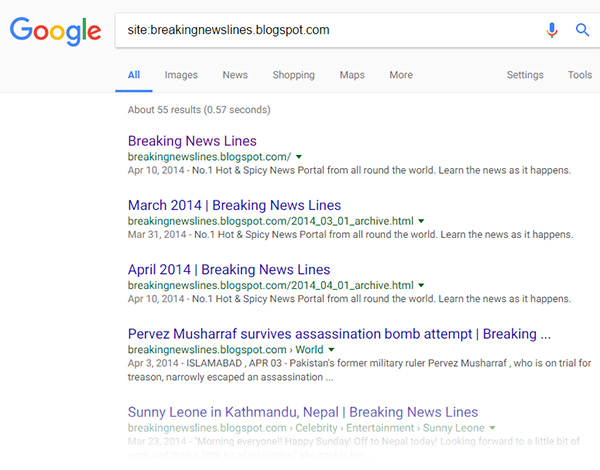 So now the truth finally comes out: Google is selectively enforcing an obscure rule to blacklist the entire Natural News site while extending immunity to its own web properties for running the exact same “violating” code.

Furthermore, while this code was running on some very old, very obscure blogs.naturalnews.com articles (under that subdomain, not the root domain), Google used that justification to ban the ENTIRE NaturalNews.com website. Yet, when that code appears on the HOME PAGE of Breaking News Lines, they aren’t banned at all. They’re still indexed and served up in the Google search results.

It’s beyond just fishy. It’s deliberate censorship via selective prosecution by the same Ministry of Truth that grants its own sites absolute immunity.

This is proof that the so-called “violation” justification that was used by Google to engage in the outrageous censorship of the entire NaturalNews.com website is openly allowed by Google on its own web properties.

In other words, Google just announced to the world: WE can break our own rules, but we’ll destroy your entire website if YOU break them (even on a handful of obscure blogger pages in a subdomain).

Google just revealed its own lack of integrity, deceptions and censorship LIES

Google has just declared it is the Ministry of Truth, and like any dangerous monopolist in a corrupt society, it is never subjected to its own rules.

The total censorship of NaturalNews.com, by the way, continues, but so does the backlash.

Join the #SaveNaturalNews movement at this link.

Most importantly, #BoycottGoogle over its brazen, outrageous censorship of Natural News, one of the most important free thinking voices on the internet today.

Listen to my Health Ranger Report podcasts for more inspiration:

DOJ finally files antitrust lawsuit against Google
Report: Amazon is “gatekeeper for e-commerce” that exploits data to compete with rivals
MONOPOLY: Amazon is blocking rival device makers from buying ads on their site
Lawmakers pummel Big Tech at anti-trust hearing: “We will not bow down!”
OBEY OR BE SILENCED: Google now ranking the “truthiness” of websites on the coronavirus to determine ad eligibility
New org takes on massive anti-conservative bias in Big Tech before it’s “too late” to save society
State lawmaker in Michigan files legislation aimed at holding tech giants liable for “viewpoint discrimination” in war to preserve free speech
Trump confirms tech giants were colluding against him in the 2016 election… so why isn’t Trump doing something to stop it?
Trump is going after Big Tech’s evil monopolies and censorship: Amazon.com now being targeted by the FTC
Facebook shares plummet after FTC announces massive probe into Big Tech antitrust violations, censorship