(Natural News) KFC makes much of its “secret blend of herbs and spices,” but there’s a much simpler reason that people tend to find the flavor of the restaurant’s chicken so striking and find themselves craving more: All KFC chicken is literally marinated in MSG.

MSG, or monosodium glutamate, is an artificial salt designed to activate the “umami” taste receptors on the tongue that give food a full, savory flavor. Unlike naturally occurring glutamate, which is an amino acid found in foods such as anchovies, tomato paste, soy sauce, Worcestershire sauce and parmesan cheese, MSG has been connected with various health problems, with some individuals more sensitive than others.

Some of the dangers of MSG might stem from the fact that it is a highly concentrated form of glutamate, which is not only an amino acid but also a neurotransmitter. Such chemicals are known as excitotoxins, meaning that while they are beneficial in low doses, in high doses they can overstimulate neurons literally to death.

Consumers of MSG have reported a wide variety of adverse effects, ranging from relatively mild but troublesome symptoms such as headache, achiness, digestive upset or frequent urination; to more debilitating symptoms such as nausea, dizziness, migraine, stomach cramps, or depression; to alarming symptoms such as numbness or burning in the mouth, facial numbness, chest tightness or pain, or shortness of breath; to potentially dangerous symptoms such as damage to the eye or dramatic changes in blood pressure.

MSG appears to kill neurons, particularly in the hypothalamus, and may be related to certain degenerative diseases marked by damage to this region.

In a subtler, but still potentially far-reaching effect, MSG also appears to disrupt the body’s satiety cues, leading to overeating.

Yet the FDA continues to classify MSG as “generally recognized as safe” (GRAS).

MSG may also carry other health risks that are seen in excitotoxins generally. These may include allergies, hypoglycemia, brain damage, brain tumors, infertility, cancer and stroke.

Because glutamate receptors are also found in the heart and intestinal tract, MSG may also have damaging effects on other organ systems. Additionally, both MSG and its fellow excitotoxin, aspartame, are known to be metabolized by the body into formaldehyde, itself a toxin and carcinogen. 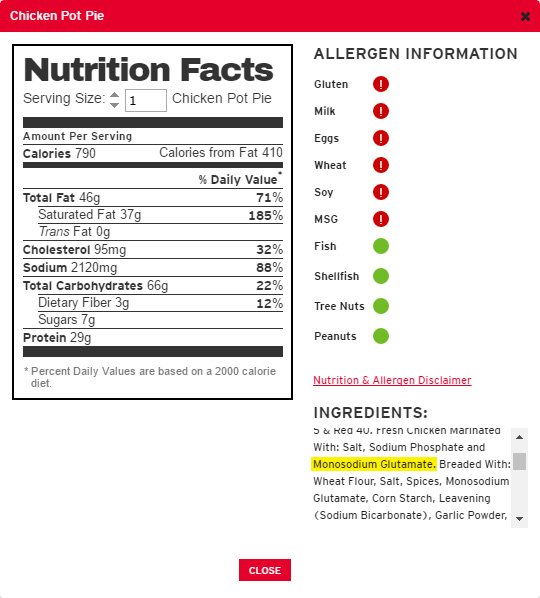 How to avoid MSG

If you want to avoid MSG, you may think it’s just as simple as reading a food label. After all, the ingredient list for KFC chicken — while admittedly concealed on the company website rather than posted alongside the menu — openly lists monosodium glutamate.

But as consumers have become warier of MSG, food manufacturers have invented a number of terms by which to conceal it. Some of these terms, such as autolyzed or hydrolyzed yeast, are simply a description of the process used to manufacture MSG. Anything autolyzed or hydrolyzed, whether “protein,” “plant protein,” “oat flour,” or “vegetable protein,” is simply another form of MSG.

MSG may also be concealed by naming its base ingredients instead, such as yeast extract, plant protein extract or malt extract.

As with so many toxic additives, the best way to avoid excitotoxins is simply to eat real food composed of as few ingredients as possible — preferably ingredients that are also the name of a food.

Holistic health practitioners say that once you eliminate excitotoxins from your diet, the body will naturally purge itself of what remains without the need for a further cleanse.

Previous :Deep state now pressuring doctors into spying on patients who own guns
Next : Disgusting “environmental crimes” against America covered up with EPA quack science
Receive Our Free Email Newsletter